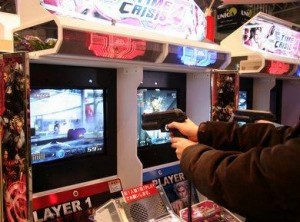 In the wake of the Newtown shootings and after receiving a complaint from one set of parents, the state of Massachusetts removed arcade games that use light-guns from state-managed rest stops along the Massachusetts Turnpike. In response, the National Coalition Against Censorship wrote a letter to Richard Davey, Secreary and CEO of the Massachusetts Department of Transportation, defending the games as constitutionally protected creative expression.

NCAC — a coalition of which CBLDF is a part and a frequent partner in our work defending comics and books — argues that the removal of the games opens the door to future acts of censorship, writing:

There is no legitimate state interest that could be asserted to justify removing specific games to appease the sensibilities of certain motorists. Moreover, by caving to the demands of one passer-by, the Department will inevitably invite others to register complaints about material they deem inappropriate. It is not a stretch to imagine someone demanding a ban on certain DVDs, magazines, or books.

The entirety of NCAC’s letter appears below. The removal of the games in Massachusetts is yet another example of how video games have been scapegoated as the cause of violent behavior, in much the same way that comic books were blamed for juvenile delinquency in the 1950s. CBLDF has helped defend video games because of the parallels between the current attacks on video games and the past attacks on comic books. In fact, our amicus brief outlining these similarities was cited in the Supreme Court’s majority opinion in Brown v. EMA, which ruled that video games are constitutionally protected speech. In removing light-gun video games from state-run rest stops, Massachusetts is committing an act of censorship.

NCAC Letter to Massachusetts Dept. of Transportation on Removal of Video Games by ncacensorship