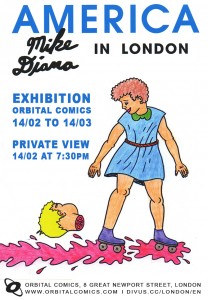 In 1994, Mike Diana became the first American artist to be convicted of obscenity for his zine Boiled Angel. London’s Orbital Comics began an exhibition of Diana’s work on Valentine’s Day, so Bleeding Cool shared a fascinating podcast they recorded with Diana last year. During the podcast, Diana spoke about the underground artists who influenced his work, how he uses art to protest injustice and corruption, how his work led to false accusations of murder, his conviction for obscenity, and more.

Diana’s controversial work contains graphic depictions of society’s most serious problems, such as religious corruption, child abuse, and rape. A Florida jury decided Diana’s work didn’t measure up to the classic works of Picasso and others, and therefore lacked “serious literary, artistic, political or scientific value.” Diana was sentenced to a 3-year probation, during which time he was not allowed to create art and his residence was subject to inspection without warning or warrant. He was not allowed contact with children under 18, had to undergo psychological testing, and told to enroll in a journalistic ethics course. Further, Diana had to pay a $3,000 fine and perform 1,248 hours of community service. CBLDF and ACLU helped defend Diana, but the Supreme Court refused to hear the case. As a result, Diana’s conviction still stands.

You can listen to the captivating podcast with Diana here.