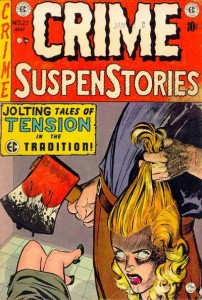 Over at the Huffington Post, Max Allan Collins, the creator behind Road to Perdition, has shared a list of the most controversial comics. With the recent revelation that Fredric Wertham fabricated much of his evidence against comics in his damning tome Seduction of the Innocent, the list reveals the often still held belief that comics are for children. Collins writes:

Wertham was even the star witness at a Senate Hearing on juvenile delinquency, in that same key year of 1954. Many lawmakers paid him heed, and in some states the words “crime” and “horror” were banned from comic-book covers. The irony is that many comics readers were not children.

CBLDF has covered Wertham’s crusade against comics extensively (as you can see here). Wertham’s actions led to decades of self-censorship by the comics industry — actions that nearly led to the demise of the medium. (It should be noted that the current rhetoric about video games parallels the 1950s outcry that led to the creation of the Comics Code Authority.)

You can take a look at Collins’s list of the most controversial comics here. It includes titles and characters that many now consider classics of the medium — Tales from the Crypt, Action Comics, Wonder Woman, Batman, Dick Tracy, Zap Comix, and more.

← Bid on Exclusive Items from the CBLDF Archives!
ComicsPRO Auction Raises More Than $20,000 for CBLDF! →