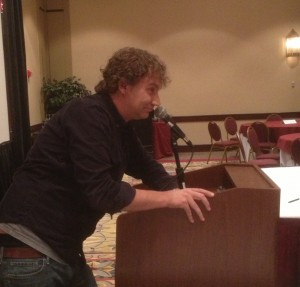 Thanks to the generosity of retailers, publishers, and creators at the ComicsPRO Annual meeting this past weekend, the Comic Book Legal Defense Fund is kicking off 2013 with a $20,000 boost! 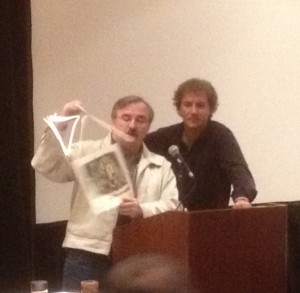 The backbone of the event was the Schanes Collection, a donation by Diamond Comics’ Bill Schanes that featured a variety of prints and signed portfolios from his personal archives and the early days of Pacific Comics. Mr. Schanes introduced all the pieces, and his generosity and enthusiasm was appreciated by the packed house. DC Comics was well represented by Senior VPs John Rood and Bob Wayne, who added to the auction a New 52 hardcover collection, signed by an astounding number of DC creators and boasting a gorgeous piece of art by long-time CBLDF supporter Jim Lee. 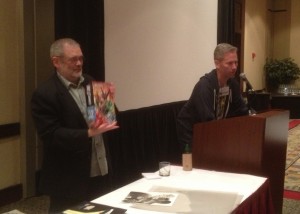 Also on hand with generous donations were Valiant Entertainment, author Fred van Lente, and ANOMALY artist Brian Haberlin, who donated a breathtaking oil painting. BLACK BEETLE creator Francesco Francavilla dropped in to auction a BATMAN pin-up  and he spent the evening creating an on-the-spot Black Beetle drawing, which was the final item auctioned.

Dark Horse editor Randy Stradley also dropped in with a surprise donation: an appearance in an upcoming STAR WARS comic! The donation sparked one of the liveliest bidding rounds of the night.

Since the early days of CBLDF, retailers have proven themselves to be a backbone of our free speech work. Comic shop owners have unfailingly understood the importance of protecting the rights of artists and collectors alike. These are men and women who are willing to fight for their right to purchase and sell comics as they see fit, fully recognizing their rights under the First Amendment.

The Fund wants to thank the retailers, ComicsPRO, and the attending publishers, creators, and kind folks that attended our second annual ComicsPRO auction. The generosity and support in the room last Friday night was stunning, and it was a remarkable reminder of what an amazing and strong community we have in our Local Comic Shops. 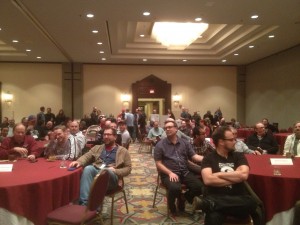 A full house of lucky folks who took home some amazing items!

← The Most Controversial Comics
See CBLDF in Seattle This Weekend! →