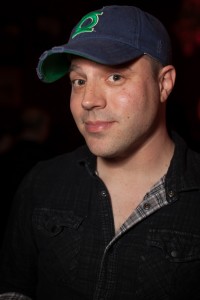 Last Friday, CBLDF hosted Greenest Night: A Celebration of Geoff Johns’ Green Lantern in Hollywood, California, at the Avalon Bardot Theatre, where fans from all over the United States joined comics royalty to toast Johns’ franchise-defining nine year run on the series. The centerpiece of the emotional evening was an interview with Johns, who opened up on the story behind his journey through the GL mythos, being mentored by Richard Donner, and much more.  Sponsored by DC Entertainment and produced by CBLDF in collaboration with Comic Book Resources and Graphitti Designs, Greenest Night raised more than $16,000 for CBLDF’s important work protecting the freedom to read. Read on for detailed accounts and full video from this exclusive event!

The night kicked off with a VIP reception, where Johns spent one-on-one time with fans who came from all over the country to toast his work. Fans also got to rub elbows with other creative luminaries, including DC Entertainment Co-Publisher and CBLDF Advisory board member Jim Lee, Jeph Loeb, Sterling Gates, and Allan Heinberg, as well as executives such as DC Entertainment President Diane Nelson and Executive Vice President John Rood. VIPs received an outstanding gift bag that included a commemorative signed copy of Absolute Green Lantern: Rebirth, a signed and authenticated copy of Green Lantern #20, a signed and numbered commemorative print, as well as an assortment of Green Lantern merchandise from DC Entertainment.

At 8:00 p.m, the action moved from the lavish reception bar to the luxurious outdoor stage, where CBLDF Executive Director Charles Brownstein kicked off the night by thanking donors and discussing CBLDF’s recent work, emphasizing the recent attempt to remove Persepolis from Chicago schools and other attacks on the freedom to read.

Loeb offered fun quips and anecdotes about that period of time, saying, “Geoff’s real gift is discipline. Something no writer has.” He told a tale about Johns’ commitment to his work, saying how he’d always try to coax Johns to breakfast, lunch, dinner, and coffee in an effort to put off writing, but that Johns would never accept unless he was on track with his goals for the day.

Loeb reflected lovingly on their early days together as they bantered about whether the Hulk or Superman was stronger and how eventually their careers came into full swing and ultimately went different paths. Loeb joked, “While I was writing about Green Hulk and Red Hulk and Blue Hulk, Geoff had the most ORIGINAL CREATIVE SPARK! Finally, there was going to be a Green Lantern and a Red Lantern and a Blue Lantern!”

But Loeb wrapped his introduction a more serious note, describing how much their careers had changed but how they’ve remained the best of friends through it all. Finally, Loeb introduced the man of the hour, saying, “Ladies and gentlemen, the only person I’ve ever met that can turn the blackest night into the brightest day: Geoff Johns.”

Loeb turned the stage over to Johns and CBR Executive Producer Jonah Weiland. Weiland guided Johns through his resurrection of Hal Jordan, his experience as director Richard Donner’s assistant, and how his family’s personal experience post-9/11 led to the creation of Arab American Lantern Simon Baz.

CBR recorded the exchange between Johns and Weiland, which you can view below:

CBLDF thanks event sponsor DC Entertainment and all of the donors who contributed to the event. We are also grateful to acknowledge the work of our event partners Comic Book Resources and Graphitti Designs, whose work was invaluable in making Greenest Night possible. We’re also grateful to Johns and the team at DC Entertainment, whose efforts made Greenest Night a reality.  Thank you!