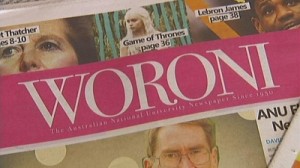 What are the limits on religious satire? Recently, Woroni, the student newspaper of the Australian National University, was forced by the school to remove and apologize for a cartoon that satirized Islam. If the Woroni case were a routine matter of censorship, this story would be troubling enough, but looking beyond the censorship, this incident raises deeper questions about the application of censorship and the heavy-handed use of threats by the university against a student-run newspaper.

According to Australia’s 7 News, on April 18, Woroni published their latest satirical installment of an ongoing series entitled “Advice from Religion.” The subject of this installment was Islam, and previous to this cartoon, “Advice” had tackled Judaism, Mormonism, Catholicism, and Scientology. Within two days, the cartoon was pulled from the newspaper’s website.

In forcing the editors to make this decision, Australian National University’s Vice Chancellor Ian Young cited two main reasons for the censorship: complaints from international students and a fear of violent backlash. According to the Canberra Times, Young argued:

“On occasion young people overstep the mark and on this occasion, they published a cartoon which was part of a satirical set of cartoons about religion. This one we felt overstepped the mark, and we had formal complaints from international students.”

Speaking on ABC Radio on Monday, Mr. Young said there was also concern about the potential for a violent backlash because of the graphic, which appeared on the back page of the paper. “There have been a number of cases internationally of satirical cartoons about the Koran which can have some very unfortunate side effects,” he said. “We felt that it actually breached the rules of the university in terms of students’ conduct.”

Woroni’s editors disagree. In a lengthy rebuttal, they argue, “Woroni is concerned about the implications of these events for freedom of speech and, more generally, the role of student publications. Woroni regularly features material that is challenging, and even at times confronting. By their very nature, universities are forums to critique ideas and beliefs. University newspapers — as a platform for students — should ideally reflect this role.”

Professor Young says he is not concerned by the comments, and denies the censorship is an attack on freedom of speech. He says the paper has published satirical pieces on other major religions without censure. But he says those pieces did not attract formal complaints. “They published a cartoon which was part of a satirical set of cartoons about religion but this one we felt overstepped the mark,” he said.

What’s troubling about Mr. Young’s comments is that the rationale he uses to defend his actions in this singular instance could just as equally been applied to the other cartoons. He points to the other satirical cartoons as a sign that the ANU isn’t enforcing heavy-handed censorship, yet he then admits the reason Woroni was able to publish those cartoons was that they “did not attract formal complaints,” suggesting if they had, those cartoons would also have been pulled.

A deeper issue at hand, too, is the manner in which the ANU attempted to force the hands of the Woroni editors. In their editorial on the issue, Woroni editors detail how “the Woroni board was twice summoned to the Chancelry, individually threatened with disciplinary action along with the authors of the piece, and informed that Woroni’s funding allocation could be compromised.” The editors describe this level of interference as “unprecedented,” writing:

The day following publication, the entire Woroni board was asked to attend a meeting with members of the ANU Chancelry, including Richard Baker, Pro Vice-Chancellor (Student Experience). The Chancelry wished to discuss the Woroni board’s response to a formal complaint submitted by the International Students Department.

In a later statement to Woroni, the Chancelry maintained that the article breached the “University rules” and the Australian Press Council Principles. Furthermore, the Chancelry commented that the “the University has a large international footprint and is mindful of maintaining its reputation of providing a welcoming environment for a diverse student and academic population.”

The Chancelry’s position is that the piece posed a threat to the ANU’s reputation and security. “[I]n a world of social media, [there is] potential for material such as the article in question to gain attention and traction in the broader world and potentially harm the interests of the University and the university community.”

“This was most clearly demonstrated by the Jyllands-Posten cartoon controversy … and violent protests in Sydney on September 15 last year,” the Chancelry told Woroni.

In light of these concerns, the Chancelry asked for an apology and an official public retraction of the piece. Woroni decided to respond in a similar manner to how it has to other complaints received in the past, by publishing an apology to any readers who felt victimised, while stressing that the piece was intended to be satirical.

After the cartoon was uploaded in a PDF to the Woroni website and Facebook page, along with the rest of that edition of the newspaper:

The Chancelry demanded a second, non-negotiable meeting with the Woroni board, and the three authors of the piece, attended by Marnie Hughes-Warrington, Deputy Vice-Chancellor (Academic). At this meeting, all Woroni editors and all three authors of the piece were threatened with disciplinary notice under Section 3.1(b) of the ANU Disciplinary Statue, should the PDF remain online.

The consequences of academic misconduct under the disciplinary proceedings range between a warning letter to academic exclusion from the university. No legal representation is permitted at disciplinary hearings. The Chancelry also indicated that Woroni’s allocation of the Student Services and Amenities Fee (SSAF) may be compromised by the situation.

As the editors argue that the actions of the ANU raise the issue over who controls a student-run newspaper: “Who should hold Woroni to account? The ANU, which provides the predominant amount of Woroni’s funding through the allocation of SSAF? Or its students, who Woroni was constitutionally established to represent?”

The message sent by the ANU is that the students can run the newspaper so long as everything they print doesn’t cause headaches for the ANU. Nowhere does Vice Chancellor Young detail his specific complaints about the cartoon itself, instead falling back on the rationale that people were offended enough to issue a formal complaint and that they feared a violent reaction because the subject of the cartoon was Islam. The stance of the ANU suggests it’s okay to satirize Catholicism, Judaism, Mormonism, and Scientology because members of those faiths have a higher tolerance for being offended and won’t resort to violence when they are offended. By refusing to let the Woroni editorial board handle the matter in house, Vice Chancellor Young and the ANU board have both denied the students the critical experience of negotiating content that has offended a portion of their readership and revealed a clear blueprint for future censoring of Woroni.