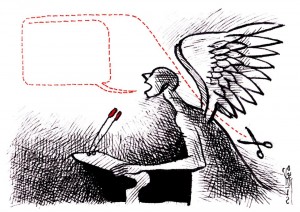 In 2009, Iran errupted into violent protest over the results of an election that Mahmoud Ahmadinejad won by a landslide, leading many to believe that he had stolen the election. As the streets filled with protestors, riot police, and teargas, cartoonists and journalists in the country were doing their part to criticize the government’s response and Ahmadinejad’s election. Among those cartoonists was Kianoush Ramezani. As he watched colleagues being arrested, Ramezani eventually fled Iran in late 2009, finding asylum in France.

Ramezani continues to create works that are critical of the Iranian regime from his new home. Olivia Stransky with Sampsonia Way recently interviewed Ramezani about his experience. In the interview, Ramezani described what he thinks are the three types of cartoonists in his former home country:

For neutral cartoonists who are still able to publish their work and have exhibitions, the most popular themes are the most visual and non-political ones!

It’s apparent that Ramezani counts himself among the exiled cartoonists, who are less likely to censor or self-censor than either the government or neutral cartoonists. Ramezani is also cognizant of the fact that the most dangerous topic to cover as a cartoonist is Islam, as doing so could lead to imprisonment or even a death sentence.

Ramezani further voices concern over government control of cartooning. Iran is home to the Tabriz Cartoon Museum, one of the few museums dedicated to the medium worldwide. Ramezani describes how the museum can exist in such a restrictive regime:

These kind of organizations don’t need to be monitored by the government because they belong to the government! Government-sponsored cartoonists established and control them, and they receive salaries from the government for this! There is also the Iranian House of Cartoon which monitors all cartoonists (both inside and outside of the country) and runs all national cartooning events (like the Tehran International Cartoon Biennial).

Ramezani confesses that currently censorship cannot be stopped in his home country, but he continues to comment on Iran’s government from exile, using social media and the Internet to ensure his voice is heard. Read more about Ramezani’s opposition to government suppresion here.