Greenest Night: A Celebration of Geoff Johns’ Green Lantern was a huge success for Comic Book Legal Defense Fund. Thanks to all the fans and comic book industry professionals that joined us at the Avalon Bardot Theatre in Hollywood, California, on May 25th, we had a great time celebrating Ge0ff Johns’ incredible 9-year run of groundbreaking Green Lantern comics, all while raising more than $16,000 for our ongoing campaign to protect First Amendment rights!

Of course, we owe a special thanks to Geoff Johns himself. Few writers are lucky enough and talented enough to re-popularize a classic character with nearly a decade’s worth of consistently engaging stories, so it was an honor that he chose to benefit CBLDF while celebrating such accomplishments with his fans.

Johns was kind enough to provide us with some rare and exciting items for the CBLDF Rewards Zone! 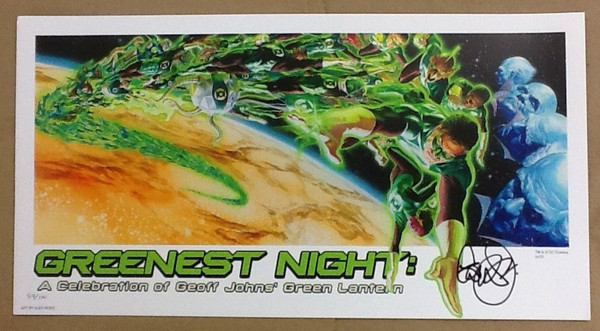 If you’ve ever seen one of Alex Ross’s paintings (and if you haven’t, you should), it should come as no surprise that this Limited Edition Green Lantern Print is quite pretty, to say the least. Created exclusively for the Greenest Night event and only available through CBLDF, each 17 x 9 inch poster is numbered and signed by Geoff Johns. 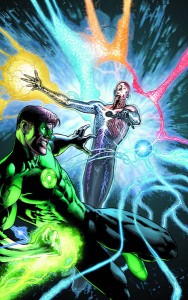 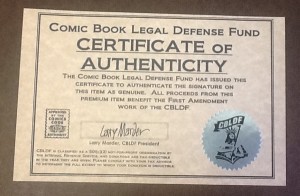 Next up is this Green Lantern Commemorative Set, signed by Geoff Johns, which includes: 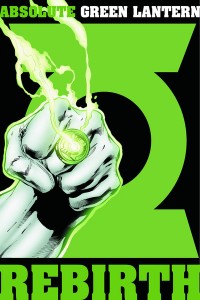 Finally, whether you’re totally new to Johns’ work on Green Lantern and are looking for a place to start, or if you’ve been following the run from the beginning and want to recapture that same excitement that you found way back in 2004, you can’t go wrong with Absolute Green Lantern Rebirth, SIGNED BY GEOFF JOHNS! With the help of Ethan Van Sciver’s realistic and detailed visuals, this miniseries kicked off what we now know to be an historic era for one of the DC’s most enduring characters. This over-sized hardcover edition is packed with bonus material, including Green Lantern (2005) #1, a preview story from Wizard magazine, a Darwyn Cooke-illustrated story from Green Lantern Secret Files 2005, and a gorgeous limited-edition, signed bookplate!

If you’re as passionate about Green Lantern as you are about the right to read, this is an opportunity for you to indulge both simultaneously, but hurry, because supplies are limited!