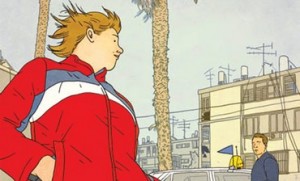 As the world becomes a more globalized place, artists have the ability to reach a wider and more diverse audience than ever before, but with that new, larger audience comes the ability to offend, as well as inspire, a greater number of people. A recent incident in Germany highlights this dynamic, as Israeli artist Rutu Modan had her artwork defaced by a Muslim student at Germany’s University of Duisburg-Essen. Subsequent to the attack, the university closed the exhibit.

Modan’s artwork was part of an exhibition at the university called “What Comics Can Do!: Recent Trends in Graphic Fiction.” According to The Jerusalem Post, “The Muslim student cut with a scissor photographs from a collage based on Modan’s seminal work Exit Wounds (‘Blutspuren’ in German). The collage showed a peace demonstration in Israel with a poster containing the word ‘Shalom.'”

German media reported that Muslim students objected to parts of the larger exhibit, particularly the work from the comic book Habibi, penned by US comic and novel artist Craig Thompson. According to [left-leaning website] Taz, the students said their religious feelings were injured by the depiction of sex scenes in Habibi and because the word “Allah” is written in Arabic calligraphy.

The question of anti-Semitism was raised; in writing for Taz, journalist Pascal Beucker “attributed the June 24 attack on the exhibit ‘to an anti-Israel, if not anti-Semitic, motive,'” a conclusion that the university is resisting:

When asked by The Jerusalem Post on Monday if the student’s conduct was animated by anti-Semitism and hatred of Israel, Beate Kostka, a spokeswoman for the university, said such questions cannot be answered at this time. Kostka objected to the presentation in [Taz], which asserted a possible anti-Semitic motivation by the vandal. “When a German paper claims an anti-Semitic attitude,” it is based on unexamined assumptions, she said.

Israeli/German relations have a complicated history, as do the Jewish and Muslim faiths. It is easy to get lost in this issue when considering those histories and to lose sight of the incident at the heart of this latest controversy. Removing the religious and national components, what’s left is a university that chose to censor by not punishing an obviously criminal act and by closing the exhibit to all other visitors.