Today, we continue our series of eBay auctions with SIGNED POSTER DAY!

Signed Poster Day begins with this Heroes for Hire poster, donated and signed by artist Khary Randolph (X-Men, Hellboy). With help from Emilio Lopez, Randolph’s reimagines the fan-favorite Marvel Comics duo of Luke “Power Man” Cage and Iron Fist as the stars of a 1970s blaxploitation-style kung-fu flick! If you stare at this poster while listening to some old funk records, you should be able to see the cinematic masterpiece play out in your head quite vividly! 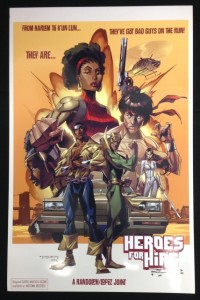 We have two more treats for Marvel fans courtesy of penciller Mark Bagley! Currently working on  Fantastic Four with writer Matt Fraction, Bagley has remained a popular Marvel mainstay for years, working on titles like The New Warriors, Thunderbolts, and The Amazing Spider-Man before co-creating (with writer Brian Michael Bendis) Ultimate Spider-Man, upon which this Ultimate Comics: Spider-Man poster is based. 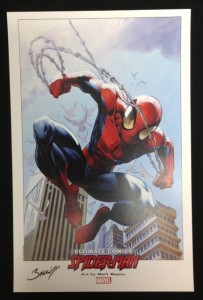 Last year, Bagley reunited with Bendis for Avengers Assemble. Though the cast of characters closely resembles that of the massively popular 2012 Avengers film, Avengers Assemble places the heroes in all-new adventures set firmly within the primary Marvel Comics universe. This poster features the cover image of Avengers Assemble #1, and you can have this beautifully rendered, signed image on your wall if you bid now! 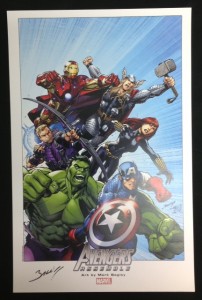 Another double-donation came to us from Jason LaTour, the artist behind two incredible 17 x 11 inch Django Unchained posters!

LaTour’s work has been seen through his art on titles like Wolverine and B.P.R.D., as well as a brief-yet-acclaimed run on as the writer of Winter Soldier with artist Nic Klein. Recently, he collaborated with the one-and-only Quentin Tarantino as a featured artist on Vertigo’s Django Unchained mini-series, adapted directly from Tarantino’s original (and much-longer) draft of the Academy Award-winning screenplay! Check out these posters on eBay! 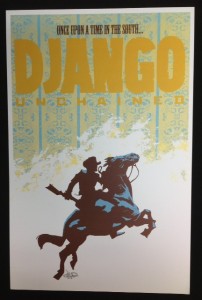 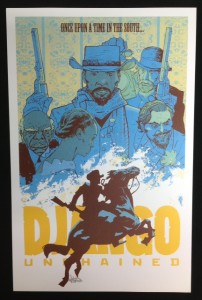 Our offerings for Signed Poster Day come to an end with this gorgeous piece by Becky Cloonan: “THE EMBRACE,” based upon Cloonan’s acclaimed self-published mini-comic, Wolves. Her work on titles like Demo, American Virgin, and Conan the Barbarian have displayed her hauntingly beautiful sense of atmosphere and emotion, and she brings that same energy here with this depiction of The Hunter and The Queen. 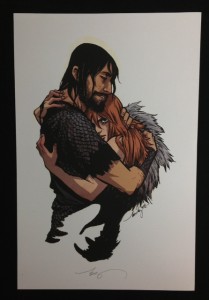 Bid now on these great posters while you still can! Auctions for THE FLASH, signed by Freddie Williams and TOME Volume 1: Vampirism (signed and sketched by Ben Templesmith) are still active, but only for a very limited time!