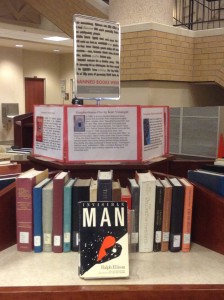 Hi, CBLDF fans! This week I’m taking a break from writing about censorship and free speech elsewhere to tell you how we recognize Banned Books Week in the university library where I’m a Reference librarian. Now in its 31st year, the annual celebration of the right to read is partly an awareness campaign, but also a not-so-secret way to “trick” people into reading some great books. One of the best ways to pique someone’s interest in a book, after all, is to tell them that someone else doesn’t want them to read it! This is proven year after year by the popularity of the books from our Banned Books Week display, which circulate at a higher rate than any of the other displays we put up.

Book challenges at the university level are pretty rare. In fact, the only two recent challenges that I know of happen to be about Alison Bechdel’s Fun Home, which was callenged at the University of Utah in 2008 and at the College of Charleston just last month. In both cases, the challenges were driven by outside interest groups seeking to generate publicity by casting college students as wide-eyed innocents likely to be corrupted and/or traumatized by a book. In both cases, the educational institutions calmly dismissed the fearmongering. So, while the students at my university probably won’t come face-to-face with a book ban anytime soon (certainly not if I have anything to say about it!), I want them be aware that it does still happen in school and public libraries, and they should be ready to speak up if they hear about a challenge in their local communities.

The basis of my annual display is the American Library Association’s Banned & Challenged Classics and 100 Most Frequently Challenged Books by Decade; I keep a spreadsheet of books on those lists that we have in our collection. (If we had an unlimited budget, I would make sure we owned all of them, but this is Louisiana and we don’t.) Every year, there are a few more titles to add based on recent challenges or bans; this time, for instance, it was Invisible Man and The Electric Kool-Aid Acid Test. After retrieving the books from the stacks, I arrange them on our display kiosk located in a high-traffic area of the first floor, right in between the Reference desk and the elevators. The display incorporates some of the great free Banned Books Week downloads from ALA’s Office for Intellectual Freedom, including the detailed bibliography of Books Challenged and/or Banned in 2012-2013 in a three-ring binder which students can flip through. 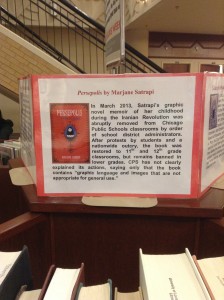 One of the many uses of metal bookends

Around the center of the hexagonal display are six laminated signs that I made about specific bans or challenges to help viewers get an idea of the breadth of reasons for challenges, who challenges books, and what the outcomes are. Last year, I selected the books for the signs from ALA’s timeline Celebrating 30 Years of Liberating Literature, but once I put them on the display I realized that the ones I’d chosen all referred to challenges/bans from the 1980s and ‘90s. To our students, who were mostly born in the early-to-mid ‘90s, that probably sounds like ancient history and reinforces the impression that censorship is a relic of the past!

This year I replaced three of the signs with much more recent cases: Persepolis, The Perks of Being a Wallflower, and The Bluest Eye. Since I want students to see that they can make a difference when books are challenged or banned, the first two cases also gave me the chance to highlight the efforts of student protesters, who combined good old-fashioned sit-ins and picketing with social media savvy to keep nationwide pressure on their school districts. (The organizers of those protests, by the way, were just recognized as Heroes of Banned Books Week.)

This year, my library also hosted a Banned Books Read-Out, which was organized by the university’s chapter of Sigma Tau Delta, the honor society for students of English. The group asked me to give a short introductory speech at the event, so I took advantage of the captive audience to relate the ban/challenge sagas of the three books mentioned above and exhort students to speak up in the face of censorship. This seems to have been a success: An instructor who attended told me that it made quite an impression on her students, and I’ve just been contacted by a student who now wants to write a paper for her Composition class on the topic of banned books in schools.

I am thrilled to have these opportunities to spread awareness of freedom-to-read issues, and I only hope that the message sticks with the students for the rest of their lives!