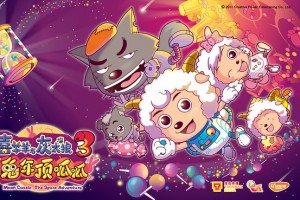 Accusations of animated violence have led to censorship of one of China’s most popular children’s cartoons off air. The cartoon, Pleasant Goat and the Big Bad Wolf — sometimes billed as China’s version of Mickey Mouse, complete with some licencing agreements with Disney — is in big trouble with China’s State Administration of Press, Publication, Radio, Film and Television.

The agency has mandated new content standards for TV animation to address violent speech. Laurie Burkitt and Lilian Lin write about the censorship in a blog post in the Wall Street Journal:

…under the proposal, cartoons should “promote good and lash out at evil,” “advocate social morality and family virtues, and resist “egoism, money worship, hedonism, superstition, pseudoscience and contents containing harmful thoughts and bad habits.” It also said cartoons should avoid violent scenes, including depictions of attacks that children could easily imitate, and should not use daily necessities for dangerous purposes.

Pleasant Goat and the Big Bad Wolf first came under scrutiny in May this year, when three boys attempted to reenact a scene from the cartoon in which the wolf roasts one of the goats. Two brothers, aged five and eight, were badly burned after being tied to a tree, while their friend set the grass around them on fire, as reported in Want China Times, an English-language Chinese news site based out of Taiwan.

The story of the show is reminiscent of Tom & Jerry or Looney Toons shorts, featuring a group of goats and the wolf that is always comically failing to eat them. According to The Telegraph, Big Big Wolf had been “physically assaulted with a frying pan on at least 9,544 occasions,” and Pleasant Goat had been “boiled alive in water 839 times and received no fewer than 1,755 electric shocks.” The violence is relatively innocuous by Western standards, but some Chinese parents to fret over the messages their impressionable young children may be imparting from the cartoon.

After the parents of the hurt children filed suit and being targeted by the State Administration of Press, Publication, Radio, Film and Television, the producer of the show, Creative Power Entertaining, imposed immediate, expensive revision to the 1,000-episode cartoon, which will cost up to 10 million yuan ($1.63 million). A studio executive said that the whole series will be amended in accordance with standards, adding that the main storyline will not be changed but certain details will be reviewed. Battle scenes, for example, will be replaced by sound effects, the executive said.

The creator of the cartoon, Huang Weiming, has stood up censors, however, insisting that his show has always been about reinforcing the message that “evil will not triumph over good” and promoting “the right values.”

China has no rating system for cartoons — instead, all appear to be lumped together under the universal guidelines for children’s cartoons. Chinese newspaper People Daily speculates that what is needed is a better ratings-system that can help parents differentiate what cartoons are appropriate for their children. The site also makes it a point to remind readers that parents have a responsibility to monitor what their children are watching to determine whether or not it is acceptable.