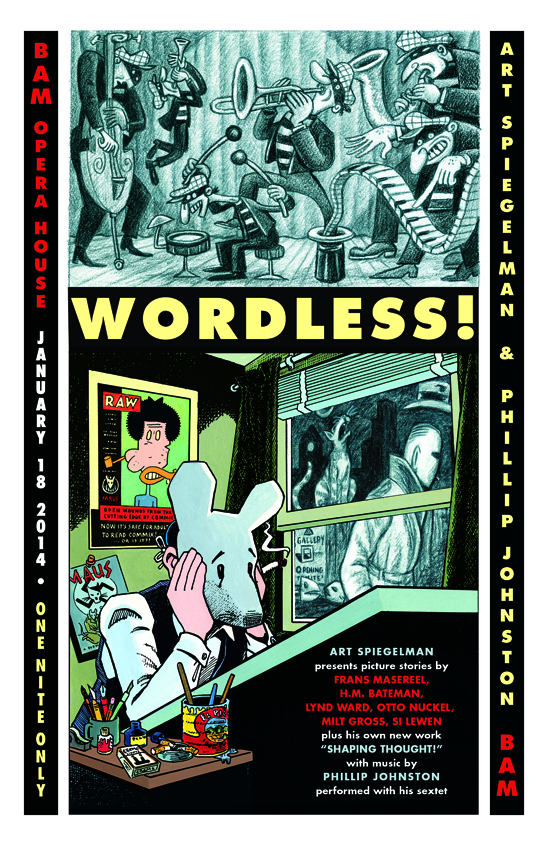 Art Spiegelman is having a triumphant, but busy, winter season.  Last month a career retrospective opened at the Jewish Museum in Manhattan, showcasing the original art from his underground days up through Maus and current works.  Shortly after the opening he took time out to help the CBLDF by signing graphic novels for our supporters.  While we were at his studio, Spiegelman spoke excitably about his next project, the US premiere of Wordless, happening for one night only on January 18 at BAM in Brooklyn.  Art asked us to help spread the word about the event, which combines music by Phillip Johnston and picture stories from Lind Ward, Milt Gross, Frans Masereel, and a new work, called “Shaping Thought” from Spiegelman himself.  Who are we to turn down that request, particularly when the work looks so cool.  Here’s a video snippet from the Australian debut:

You can get ready for the event, and support CBLDF, by picking up a copy of Maus or the brand new Co-Mix signed by Spiegelman in our rewards zone!

Here’s the full press release for Wordless.  We’ll see you there!

“Art Spiegelman has almost single-handedly brought comic books out of the toy closet and onto the literature shelves.”
—LA Weekly

Celebrated cartoonist Art Spiegelman comes to BAM with WORDLESS!, an innovative hybrid of slides, talk, and musical performance, created in collaboration with acclaimed jazz composer Phillip Johnston, who performs an all-new score with his sextet. Spiegelman leads audiences on a personal tour of the first graphic novels — silent picture stories made by early-20th-century masters like Frans Masereel, H.M. Bateman, Lynd Ward, Otto Nuckel,
Milt Gross, and Si Lewen — and their influence on him. In navigating “the battle between words and pictures,” he smashes at the hyphen between high and low art, featuring a new work drawn specifically
for this project called Shaping Thought!

Sydney-based New Yorker Phillip Johnston is best known for his work as a jazz composer (Microscopic Septet, The Coolerators), and as a creator of music for silent films, most recently Lotte Reineger’s 1927
animated feature THE ADVENTURES OF PRINCE ACHMED.

Named one of TIME magazine’s 100 Most Influential People, Art Spiegelman has been translated into over 25 languages. He has always been an innovator, whether creating scurrilous bubble gum cards for kids, politically charged NEW YORKER covers for grown-ups, or pushing the boundaries of comics in RAW, the influential avant-garde magazine that he co-edited in the 1980s with his spouse and frequent collaborator, Françoise Mouly. Spiegelman’s most recent book is CO-MIX, A Retrospective of Comics, Graphics and Scraps.

For inquiries about the BAM engagement, please contact Adriana Leshko at aleshko@BAM.org or 718.724.8021.

← Get What You Really Wanted for the Holidays from CBLDF!
Censorship 2013: Comics Editors Convicted of Obscenity →