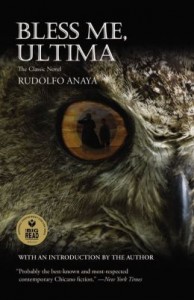 CBLDF has joined a coalition led by CBLDF-sponsored Kids’ Right to Read Project to send a letter to the school board of the Teton School District in Driggs, Idaho, to defend Rudolfo Anaya’s acclaimed coming of age tale, Bless Me, Ultima. CBLDF joins coalition efforts like this one to protect the freedom to read comics. Censorship manifests in many ways, and the unique visual nature of comics makes them more prone to censorship than other types of books. Taking an active stand against all instances of censorship curbs precedent that could adversely affect the rights upon which comics readers depend.

The book is frequently used in classrooms to challenge and enrich student worldviews. KRRP explains in their letter:

In addition to being one of 12 American novels recommended for The National Endowment for the Arts “Big Read” initiative, the book appears on the International Baccalaureate and Advanced Placement (AP) lists and has appeared on the AP exam four times in the last ten years. The book is frequently taught in high school classrooms as a way to expand students’ worldview and introduce them to an American experience that is perhaps new to some students and immensely relatable to others. The language and situations in this work, as in any text under study, must be seen in the context of the entire work.

Bless Me, Utlima was required reading for sophomore English, but an alternate assignment could be selected. Regardless, parents in the system filed a complaint against the book, expressing concerns over language and “satanic rituals.” Jeanette Boner with Valley Citizen, a local newsource, spoke with some of the parents filing the complaint:

“I opened the book and I was appalled,” said Shaylee Kearsley, who was the first to sound the alarm that was heard around social media earlier this week. “It’s not about the teacher, I have respect for the teacher. There’s just a lot of profanity and the f-word is used a lot and there are some satanic rituals in the book.”

Since receiving the complaint, the system removed the book from classrooms pending review, but not everyone in the community agrees with the complainants. From Boner:

But parent Linda Hutchinson whose daughter is currently reading “Bless Me, Ultima” and whose son read the book as a junior last year, thinks the selection is appropriate.

“My stance on the whole thing, is yes, parents have every right to stick up for their kids, but it’s important for us to introduce different types of literature to our children and discuss different things that are mentioned in literature,” Hutchinson, who has read the book, said.

“I feel extremely blessed to have parents that allowed me to read other types of literature. Before you judge something you should read it. Especially books that deal with good and evil, because ultimately in the end good wins,” she added.

The entirety of KRRP’s letter in defense of Bless Me, Ultima follows.

Acacia O’Connor, the Coordinator of KRRP, sent a second correspondence to the school board after coverage in the Teton Valley News:

Dear Mr. Woosltenhulme and Members of the Board,

An article in yesterday’s Teton Valley News requires a clarification of our previous letter dated Dec. 5, 2013. The article reports that district policies, rather than the recent removal of Bless Me, Ultima, will be the focus of Monday night’s meeting.

The article quotes School Board President Doug Petersen as saying that “we will not dictate curriculum” and that “[w]e are not talking about banning a book.” However, that is in fact exactly what has happened. Superintendent Woolstenhulme removed the book, publicly stating that he had not read the book.

The Board can hardly duck the question of whether the book should have been removed by saying that its role is to set policy. The two issues are irrevocably intertwined in this case: the removal of the book is not only constitutionally suspect under the First Amendment, as already noted, but also contravenes District Policy 2540: “Curricular materials may be removed when they no longer meet the criteria for initial selection, when they are worn out, or when they have been judged inappropriate through the Learning Materials Review Process.”To our knowledge, none of the conditions for removal existed in this case, and no review process was initiated. Thus, the Superintendent’s peremptory action in taking the book out of classrooms cannot be sanctioned under existing policy. This deviation from the district’s own policies and procedures raises independent due process concerns. Even if the district were to reconsider and adopt new policy, such an action would not affect the validity of the actions at issue here.

As stated previously, there was no legitimate pedagogical basis for removal of the book, not only because of the undisputed literary and educational value of the book, but also because of the Superintendent’s admission that he acted without even reading the book to assess its educational merit and without convening a review committee to do so. His action violated a basic tenet of the First Amendment: “If there is any fixed star in our constitutional constellation, it is that no official, high or petty, can prescribe what shall be orthodox in politics, nationalism, religion or other matters of opinion.” West Virginia Board of Education v. Barnette (1943).

It is worth noting that educators are rarely held to violate the First Amendment when they include material that has pedagogical value, whereas removal of material for ideological reasons is vulnerable to legal challenge. See Monteiro v. Tempe Union High School District (9th Cir. 1998) (rejecting challenge to books based on racial content, and recognizing the First Amendment right of students to read books selected for their “legitimate educational value”), Parker v. Hurley (1st Cir. 2008) (rejected effort to remove books that offend parents’ and students’ religious beliefs), Pratt v. Independent School Dist. No. 831 (8th Cir. 1982) (First Amendment violated when films removed because of hostility to content and message), and Case v. Unified School Dist. No. 233 (D. Kan. 1995) (First Amendment violated by removing a book from school library based on hostility to its ideas).

We urge you to reinstate Bless Me, Ultima without delay as there is no legitimate basis for its removal.

The school board convenes tonight. We will post an updates as the story develops, so return to CBLDF.org for the latest news.

← The Best Comics Gifts Come From CBLDF!
Last Chance to Join the CBLDF in 2013! →