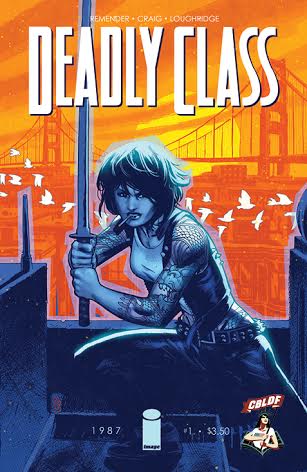 The Comic Book Legal Defense Fund is proud to team up with Image Comics to launch our 2014 convention program with the release of the CBLDF Exclusive Deadly Class #1 Liberty Variant, featuring a stunning variant cover by Nic Klein premiering this weekend at Wizard World Portland!

Deadly Class #1 unites Rick Remender, Wesley Craig and Lee Loughridge for the tale of how the most dangerous and damaged teenagers on earth took on the 1980s underground.  Limited to 1,000 pieces, the Deadly Class #1 Liberty Variant is available for contributions of $10 each for card-carrying CBLDF Members, or $20 for non-members.

“Launching Deadly Class to support CBLDF is such a great fit,” says series creator Rick Remender.  “CBLDF’s work protecting creators and retailers makes it possible to do a book like this, where we get to candidly express the rebellion, individuality, and raw emotion of teenage life.  I’m hope it helps raise some money for their important work.”

Remender describes Deadly Class: “It’s 1987. Marcus Lopez hates school. His grades suck. He has no money. The jocks are hassling his friends. He can’t focus in class, his mind constantly drifting to the stunning girl in the front row and the Dag Nasty show he has tickets to. But the jocks are the children of Joseph Stalin’s top assassin, the teachers are members of an ancient league of assassins, the class he’s failing is “Dismemberment 101” and his crush, member of the most notorious crime syndicate in Japan, has a double-digit body count. Welcome to the most brutal high school on earth, where the world’s top crime families send the next generation of assassins to be trained. Murder is an art. Killing is a craft. At King’s Dominion high school for the deadly arts, the dagger in your back isn’t always metaphorical, nor is your fellow classmates poison.”