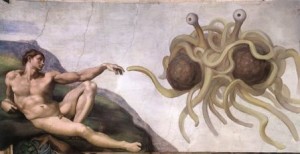 Pastafarians, don your colanders! Posters depicting the satirical deity Flying Spaghetti Monster were recently banned from an activities fair at a public university in London because they could be “religiously offensive,” reports The Independent.

On their recruitment posters, members of London South Bank University’s Atheist Society had used a popular modification of Michelangelo’s Creation of Adam in which God is replaced by the Flying Spaghetti Monster. Student union officials, who removed the posters from the Atheist Society booth overnight, initially told president Chloe Ansari that Adam’s exposed genitals were the problem. When she offered to print a pixelated version, however, they admitted that they were actually concerned the posters might offend religious individuals. Ultimately the Atheist Society’s entire booth was removed and the group did not participate in the second day of the fair.

In response to the ban, Ansari said:

I never expected to face such blatant censorship and fragile sensibilities at university, I thought this would be an institution where I could challenge beliefs and in turn be challenged. All I have seen is religious sensibilities trumping all other rights with no space for argument, challenge or reasoned debate. It is not what I expected when I came to university.

South Bank student union president Barbara Ahland said that her organization is investigating the “alleged incident.” The dispute comes on the heels of a similar one at the London School of Economics, where two student members of the Atheist, Secularist and Humanist Society were told during an activities fair to cover up or remove t-shirts showing panels from the webcomic Jesus and Mo. The students eventually received an apology from the school, but only after parliamentary candidate Maajid Nawaz brought national attention to the case–and the BBC’s own censoring of the image–by sharing a Jesus and Mo comic on Twitter.