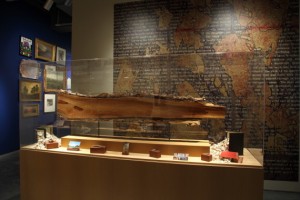 The president of Georgia’s Kennesaw State University set a poor precedent for free expression in the school’s new art museum last week when he ordered an exhibit censored before the building had even opened to the public.

During a walkthrough prior to the opening of the inaugural exhibit, President Daniel Papp encountered a mere mention of white supremacist views held by Corra Harris, a long-deceased writer whose homestead the university acquired in 2009. Two days before the Saturday opening, Papp told curators he would cancel it altogether if they did not remove the evidence of Harris’ racism. On Friday, the university issued a rather Orwellian statement explaining that this portion of the exhibit was “not aligned with the celebratory atmosphere of the museum’s opening.”

Ruth Stanford, the sculptor and Georgia State University professor who designed the installation about Harris called “A Walk in the Valley,” thought that she had handled the issue as delicately as possible. When KSU acquired Harris’ land in 2009, critics pointed out that the writer’s career was launched by a letter to the editor of The Independent in which she simultaneously denounced lynchings of black men and blamed the victims as “hideous monster[s], a possible menace to every home in the South.” Upon being asked to conceive an installation about Harris’ homestead, Stanford never considered ignoring this aspect entirely; she incorporated fragments of the letter into the artwork itself and made the full text available in a resource room associated with the exhibit.

After Papp ordered her work removed, Stanford was baffled as to how she could have avoided mentioning Harris’ racist views. She also questioned the official line that art in the inaugural exhibition should only be celebratory, pointing out that such a limitation is contrary to the university’s mission: “This is a brand-new museum at an educational institution, so part of its mission is education, and as such it has a responsibility to present all kinds of art, and not all art is comfortable.” (Indeed, Stanford’s piece was replaced by another artist’s work “that addresses the housing crisis.” This is undoubtedly worthwhile, but does not sound very celebratory!)

Papp’s attempt to stifle free expression has backfired spectacularly: opponents have started an online petition, organized a protest at the opening this past Saturday, and obviously brought negative nationwide attention to what would otherwise have been a quiet local event. He could have learned from past attempts to suppress discussion of the painful issue of racism in public art, as when the public library in Newark, New Jersey temporarily covered up a drawing that confronted the intimidation and assaults that continued to be visited upon black southerners after slavery ended. In that case, the library did put the work back on display and even invited the artist to speak about “artistic freedom and the role of black artists in society.” Is such a positive conclusion too much to hope for at Kennesaw State University?

← CBLDF Joins Coalition Urging Supreme Court to Uphold Right to Bring First Amendment Challenges
Instead of Shielding Kids from Cartoon Violence, Why Not Address It Honestly? →