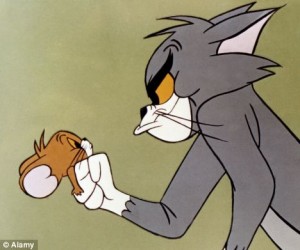 Amongst all the stories of parents blaming books, video games, movies, and TV for corrupting their children, it can sometimes be easy to forget that these are only the loudest and most sensational voices; there are still plenty of parents who take responsibility for their kids’ media consumption by discussing topics that may be unfamiliar or confusing, or even restricting — on an individual basis, of course — books or media that the children simply are not ready for. Recently we came across a shining example of such level-headed parenting over at Babble, where blogger and mom Joanna Mazewski argued against censoring violence in vintage animation to protect contemporary sensibilities.

For Mazewski the question arose when her children, aged 4 and 6, took advantage of modern technology to enjoy some classic cartoons including Tom & Jerry, Tweety Bird, and Duck Tales. She admits she didn’t consider that the violent content in some of the shows might be more than her kids were used to — until she saw her 4-year-old son pretend to choke his older sister in the bath. When questioned, he responded that he was only imitating what he’d seen Tom do to Jerry. While any parent might be initially alarmed by this impulse, Mazewski was able to step back and realize that it was not the end of the world:

I was shocked yes, but I didn’t want to take any drastic measures in banning classic cartoons from them. After all, these were the same cartoons I watched while I was their age, and from what I can tell you, I’m a sane, law-abiding citizen that doesn’t go around choking people on the streets. I proceeded to explain to my children that they are to keep their hands off of each other in that type of manner and that the questionable things they see in cartoons shouldn’t be mimicked in real life.

The explanation sufficed, she said, until her daughter came across a short bluntly titled Tom Gets Shot. Mazewski was again struck by the distance between vintage cartoons that she fondly remembers watching as a child and those that animation studios put out for young viewers today. Moreover, every real-life mass shooting prompts studios to self-censor even more; Mazewski points out that Warner Bros. embarked on a project to “scrutinize depictions of weapons” in the animated series Beware the Batman after the Aurora movie theater shooting. Among other changes, according to Variety, this entailed making the guns on the program look more “reminiscent of sci-fi fare”–placing them in the realm of fantasy rather than reality. But Mazewski questions whether this protective impulse actually benefits children who still have to live in and relate to the real world:

By totally censoring violence in animation, are we taking one step forward or two steps back in our quest to better educate our children about violence in society? I mean, I myself remember watching Elmer Fudd trying to shoot down Bugs Bunny with his double-barreled shotgun while hunting down that mean old “wabbit.” If Warner Bros. decided to cut every gun scene in their classic cartoons, they would have to go through their entire back catalog of the studio’s history.

Instead of banning guns on both the small and big screen, shouldn’t we be using these cartoons and films as an opportunity to open up more dialogue with our children about the dangers of weapons and how they shouldn’t be used against people? It is, after all, our job as parents to teach, explain, and be a little more [effective in] preventing gun accidents in America.

As Mazewski has learned through experience, children are able to separate cartoons from reality, especially if their parents are open to honest discussion of difficult topics. (Violence is not the only content that studios might want to erase from their history — last year, Warner ruffled some feathers among adult fans when it excluded two episodes involving blackface performances from a Tom & Jerry collection. Many parents today would probably opt not to share those episodes with their children, but it’s also somewhat pointless for the studio to pretend they never existed.) Moreover, she points out, children are inevitably curious about anything forbidden to them — so isn’t it better for them to explore delicate issues along with their parents?