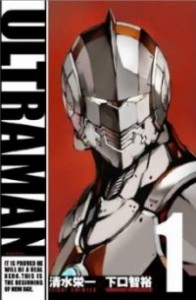 Malaysian Home Affairs Ministry has banned the Malay language edition of popular Japanese comic Ultraman, The Ultrapower stating that the book contains “elements that can undermine public security and societal morals,” according to the Associated Press.

The specific element in question was use of the word “Allah” to describe Ultraman King, a lead character in the comic. Late in 2013, a court ruling banned non-Muslims from using Allah to refer to the Christian God. Earlier this year, Malaysian Islamic authorities seized hundreds of Bibles that contained “Allah.” Malay Christians have long been using the Arabic word to describe God, claiming that it’s the most accurate translation.

The Catholic Church has been fighting to overturn the ban on using “Allah,” which means there’s still hope for the comic. Last year a lower court ruled in favor of the government, and although the church has appealed the decision, The Federal Court has not decided if they will hear the case. 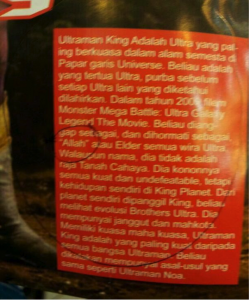 One of the offending pages. Translation: “He is considered, and respected as, ‘Allah’ or the elder to all Ultra heroes.”

A statement released from the Home Affairs Ministry states that, “Ultraman is idolized by many children,” and equating Ultraman King to Allah would “confuse Muslim children and damage their faith.” That’s a pretty remarkable superpower for silver-and-red humanoid robot who’s best known for kicking kaiju butt.