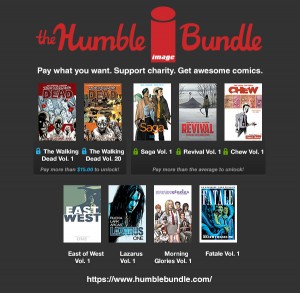 Humble Bundle has teamed up with mega-publisher Image Comics to launch Humble Image Comics Bundle today, offering up digital editions of nine New York Times bestselling, Eisner award-winning comic books starting at as little as one cent. Customers can pay what they want and choose where their money goes. The promotion runs for two weeks on https://www.humblebundle.com

Customers can name their price for East of West Vol. 1, Lazarus Vol. 1, Morning Glories Vol. 1, and Fatale Vol. 1. Those who pay more than the average price will also receive Saga Vol. 1, Revival Vol. 1 and Chew Vol. 1. Paying $15 or more will unlock The Walking Dead Vol. 1 and 20, completing the bundle of nine comic books.

Customers can choose how their payment is allocated: between the comic book creators and/or the Comic Book Legal Defense Fund, a non-profit organization dedicated to the protection of the First Amendment rights of the comics art form and its community. Since Humble Bundle’s launch in 2010, $37 million has been raised for more than 20 different charities and non-profit organizations.

About Humble Bundle
Humble Bundle organizes pay-what-you-want plus charity promotions for awesome digital content and puts the power directly in the hands of the consumers, offering them fully-featured titles at prices they set themselves. Consumers pay what they want and decide how to allocate their money between content creators, charity and a humble tip. Humble Bundle also offers the Humble Store, a digital storefront that features great games at great prices with a portion of sales going to select charities. Thanks to the generous contributions from our community, we have raised more than $37 million for charity to date. For more information, please visithttps://www.humblebundle.com