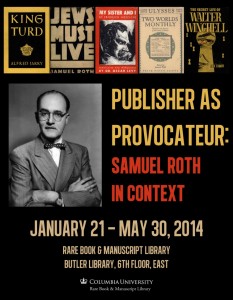 Are graphic novels too graphic? Lewd or literary? This Wednesday, April 30, CBLDF Executive Director Charles Brownstein will discuss these questions and more at Columbia University. Columbia University Libraries and Information Services Rare Book & Manuscript Library are currently hosting an exhibition centered on the career of publisher Samuel Roth. At 6:00 p.m. Wednesday, Brownstein will join Robert Berry, cartoonist and creator of Ulysses Seen and Chad Rutkowski, copyright attorney and Business Manager of Throwaway Horse LLC, for “Lewd or Literary? When Are Graphic Novels Too Graphic,” in 523 Butler Library.

“Samuel Roth’s first project as a publisher was a student-run poetry journal The Lyric that he started at Columbia with his friend Frank Tannenbaum in 1917. Over the next fifty years, he published hundreds of books and several literary and lifestyle magazines. A savvy exploiter of international copyright law, Roth repackaged European books and other material in the public domain, using his facility for writing advertising copy to market both classical and contemporary avant-garde writing as exciting and scandalous.

Roth also published original writing and hired authors to write books.  The previously unpublished Claude McKay manuscript “Amiable With Big Teeth: A Novel of the Love Affair Between the Communists and the Poor Black Sheep of Harlem,” discovered in Roth’s archive in 2009 will be on display in the exhibition.

Roth’s career was punctuated by legal skirmishes and jail time. His unauthorized release of James Joyce’s Ulysses provoked an International Protest organized by Joyce and Joyce’s publisher, Sylvia Beach, in 1927. The minority ruling from his 1957 case U.S. v. Good Times created the precedent for the 1959 case Grove v. Christenberry, which changed the definition of obscenity, making it easier to publish explicit material if it had literary, artistic, political, or scientific value. The exhibit shows the active role that publishers took to push the boundaries of the acceptable to current standards.

“Roth is an important figure in the history of twentieth century publishing, even from the position he occupied in the margins,” said Karla Nielsen of the RBML, who curated the exhibition with her colleague Jane Siegel. “He ‘pandered to the prurient interest,’ but he also sought out the most interesting and challenging contemporary writers and was a worthy adversary for the U.S. Postal Service, the New York Society for the Suppression of Vice, and the Courts.”

The exhibition includes materials related to the complicated publication of James Joyce’s Ulysses in Europe and the United States, and the repercussions of Roth’s court cases for later publishers such as the Grove Press and Lyle Stuart.  The broader context that the exhibition provides for Roth’s career includes the longer history of publication of sexually explicit material such as Fanny Hill, the publication of political exposes, and the use of subscription models and mail orders to avoid censorship. “

The event series focuses on obscenity trials, censorship, and copyright law — pillars of CBLDF’s expertise. You can learn more by joining Brownstein at 6:00 p.m. EDT, this Wednesday, April 30, for “Lewd or Literary? When Are Graphic Novels Too Graphic.” The panel takes place in 523 Butler Library on the Columbia University campus. You can get more details here.