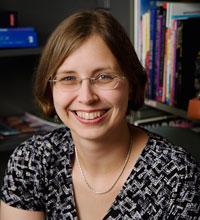 Heads up! CBLDF fave Carol Tilley, the University of Illinois professor and researcher who last year proved that anti-comics crusader Fredric Wertham fabricated evidence for his 1954 book Seduction of the Innocent, has a couple of upcoming appearances that may interest our readers in the Great Lakes region.

First, Tilley will be speaking this Friday, April 11, at Holy Cross College in Notre Dame, Indiana. As part of the college’s Arts Day, Tilley will present a lecture called “When Comics Almost Died: Readers, Censors, and Innovation.” Also appearing will be comics artist Gene Ha, a fellow Indiana native who has worked on Batman, Superman, Green Lantern, X-Men, the Justice League of America, and more. The event is free of charge and will be held from 3-5 p.m. in the school’s Driscoll Auditorium.

Later this month, Tilley will participate in two sessions at the Chicago Comic and Entertainment Expo, better known as C2E2. On Friday, April 25 at 2 p.m., she will present “Fredric Wertham’s Seduction of the Innocent and the Comics Code Authority at 60.” Later that same day, at 5:45 p.m., Tilley will also participate in a panel discussion called “Comics and the Academy: The Role of Graphic Novels in Higher Education.” C2E2 will be held in the South Building at McCormick Place, 2301 S. Lakeshore Drive. Advance tickets are $25 for Friday only or $60 for the entire three-day show.