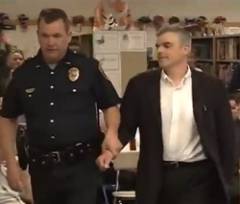 At a meeting this past Monday, the school board in Gilford, New Hampshire addressed what was expected to be a routine complaint from parent William Baer about the content of a book that was assigned in his daughter’s high school Honors English class. But when Baer refused to let the issue rest and persisted in interrupting another attendee who was trying to speak in favor of the book, he ended up being led away in handcuffs, arrested for disorderly conduct. Since the meeting, Baer has undertaken a mini-tour of local media outlets to claim that his First Amendment rights were violated.

Baer’s daughter and her classmates were assigned to read the book Nineteen Minutes by New Hampshire native Jodi Picoult. The book has been on the Gilford School District’s approved curriculum list since it was published in 2007, but since it deals with a school shooting and includes one scene of sexual activity, parents were supposed to receive a notification about the content and the availability of alternate reading assignments. After Baer raised objections last week, district officials realized that notice had not been sent and arranged for it to go out on Monday, which happened to be the same day as the previously scheduled board meeting.

Although the parental notification problem had already been resolved before the meeting, Baer attended and voiced his concerns about Nineteen Minutes during the public comment period–as he had every right to do, of course. But when he interrupted another parent’s allotted speaking time, and became combative upon being asked to give everyone a chance to present their views, he was arrested by acting police chief James Leach. Baer was released on $700 bail and has a court date scheduled for June 17.

As Baer has helpfully and repeatedly told anyone who would listen, the passage he objects to in Nineteen Minutes can be found on page 313. While he says that it “reads like a transcript for a triple-X porno movie,” it actually describes a sexual assault. (This is far from the first time would-be censors have mistaken depictions of sexual violence for pornography: see for instance The Bluest Eye and Speak.) School district officials readily acknowledge that some students may find the content–either the assault or the school shooting which is a much larger focus of the book–disturbing, which is why alternate reading assignments have been available all along. The district has also decided that beginning with the 2014-15 school year, books with potentially controversial content will require a parent’s approval before students can read them, as opposed to the current “opt out” system. But neither the school board nor district administrators seem to have entertained any notion of removing the book from the curriculum, for which we commend them. If Baer–who happens to be an attorney–is so concerned about First Amendment rights, perhaps he should read up on the landmark school speech case Board of Education v. Pico.