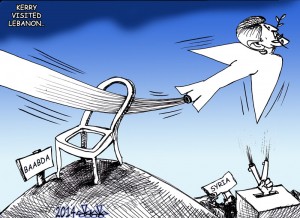 A globalization class at Lebanese American University hosted political cartoonist Hassan Bleibel as he paid a visit to illustrate the power of using art to tackle sensitive issues. The cartoonist is best known for his work at the Daily Star Al-Mostaqbal newspaper, where his work encountered challenges for its criticism on Israeli policies. Bleibel was joined by Dutch Ambassador Hester Somsen, who was in attendance to promote a contest sponsored by a partnership between the Dutch Ministry of Foreign Affairs and The Hague, entitled “Peace & Justice.”

The contest calls for “the promotion and development of international law” and allows cartoonists, artists and students from around the world to use their art to engage in a global debate about peace and justice with comics. The ten best entries will be selected and displayed at the Peace Palace in The Hague for the week of September 21, 2014 to commemorate the International Day of Peace (that date also marks the beginning of Banned Books Week here in the U.S.).

One student in attendance asked Somsen if she truly thought art was able to influence diplomacy. His response:

“The influence of art is huge. The impact of an artist might be even bigger than my impact as a diplomat. And we just saw an example of its power visualized here in front of us,” she says pointing to the board. “Everyone looks at this and immediately wonders: ‘What does it mean?’ Indeed, cartoons and other media — rap songs, paintings, plays — can all trigger thinking and debate.”

The class went on to discuss various cases of cartoonists around the world who had faced challenges and censorship over their work. Artist such as Maajid Nawaz, Majida Shaheen and Bahaa al-Bukhair have faced death threats, prison sentences and acts of violence for expressing their political views through comics, and it seems that this contest is working to promote freedom of expression through art.

Bleibel shared his views on the challenges he has faced and his stance on creating potentially offensive material:

“There is a difference between freedom of expression, constructive criticism and insult,” explains Bleibel. He gave examples from his own journey as a cartoonist dealing with censorship and misunderstanding. “For a long time, I was trying to criticize Israel’s policies in my cartoons, without realizing that my graphics were anti-Semitic – something I didn’t intend at all.”

Bleibel went on to explain that a cartoonist inevitably has to step on a few toes, because one cannot silence themself at every little turn or worry about being termed ‘offensive’. “Every society has taboos, especially when it comes to religion, and even cartoonists with the best of intentions can fall victim to misinterpretation. But at the end of the day, they are here to challenge society and they have to be prepared to face all kinds of reactions.”

The Peace & Justice contest is open to all individuals. More details may be found at www.cartoonmovement.com/login. The username is PeaceJustice and the password is Article90.