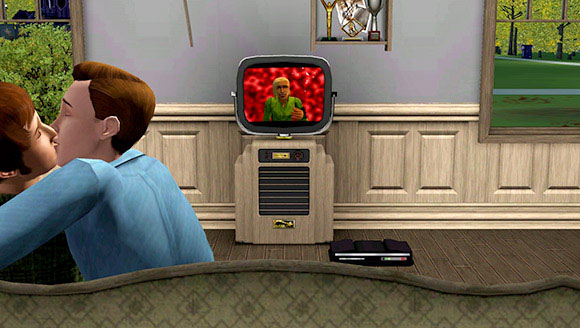 For a long time, the common wisdom among publishers, movie studios, and other gatekeepers of content has held that LGBT characters are verboten in mainstream all-ages material. LGBT content is a frequent target of censors, and as we saw in a recent column by comic artist Kate Leth, the justification offered for self-censorship of LGBT content is usually financial: Companies fear that they’ll deter customers and lose money if they simply allow LGBT characters to exist. But last week a post on The New Yorker’s Elements blog showed just how wrong that common wisdom is, as writer Simon Parkin took a look at the 15-year history of LGBT inclusion in The Sims franchise.

Parkin talked to Patrick J. Barrett III, a developer who joined the EA team working on the original Sims in 1998 and was largely responsible for coding the way that characters interact. Barrett, who is gay himself, recalled that same-sex relationships ended up being allowed in the game almost by accident. In fact, the decision had been made to disallow them before he was hired — but then Barrett was mistakenly given some outdated development notes to work from while his supervisor was on vacation. He finished the basic social interaction coding as originally conceived, with same-sex relationships included. No one on the development team had any personal objections, but it was widely assumed that someone higher up at EA would eventually notice and put the kibosh on LGBT Sims.

Before that could happen, however, Barrett was asked to prepare some Sims scenes to be presented at the industry trade show E3. The scenes were supposed to be “on rails,” meaning the characters’ interactions would be fixed and always happen the same way, but Barrett ran out of time to prepare some of the background Sims in a wedding scene that had a large crowd attending. Their spontaneity at E3 actually turned out to be fortuitous:

On the first day of the show, the game’s producers, Kana Ryan and Chris Trottier, watched in disbelief as two of the female Sims attending the virtual wedding leaned in and began to passionately kiss. They had, during the live simulation, fallen in love. Moreover, they had chosen this moment to express their affection, in front of a live audience of assorted press.

This created a lot of buzz for The Sims, which until then had been widely regarded as nothing more than an eccentric offshoot of the earlier SimCity games. Barrett also concedes it probably didn’t hurt that the E3 lovebirds happened to be female: “I guess straight guys that make sports games loved the idea of controlling two lesbians.” But the game’s success with industry insiders still didn’t guarantee that it would be passed by EA or accepted by the general public.

As it turned out, approval from EA was easy enough. Barrett further fine-tuned the way that a player could influence each Sim’s sexual orientation, along with a host of other attributes, and the company decided that the E3 buzz would work in the game’s favor. Finally The Sims was unleashed on the world in 1999, and… nary a peep was heard about LGBT characters. Barrett isn’t sure it could happen that way today:

It was… a different time; people weren’t so violently for or against same-sex relationships. They didn’t go out of the way to find it and react to it. The right-wing press didn’t have the platform they have today to scream. There was no Twitter, no Facebook, no blogs. I kinda hoped people would come at night with pitchforks and torches. But it never happened.

In light of that non-event, many gamers were surprised this year when Nintendo’s Tomodachi Life was released without same-sex relationships. Barrett says what the company failed to understand is “that family friendly can include gay people. Children don’t understand the concept of gay any more than they do straight.” He adds that gamers who have always seen their own sexual orientation reflected back at them may not consider how much representation really does matter:

[In 1999], it wasn’t considered ‘normal’ to be gay or lesbian. Some even saw it as dangerous. But in The Sims it was normal and safe to be a gay person. It was the first time we could play a game and be free to see ourselves represented within. It was a magical moment when my first same-sex Sims coupled kissed. I still sometimes wonder how in the world I got away with it.