Dynamite Entertainment is excited to announce the addition of Bitcoin as an accepted form of payment at http://dynamite.com/digital/, the company’s recently-launched digital store for DRM-Free digital comics. The Bitcoin payment system joins existing payment options that include Visa, Mastercard, American Express, Discover, and PayPal. 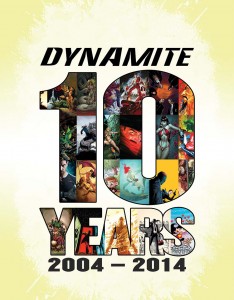 Fans who wish to make purchases through Dynamite Digital using Bitcoin need only login with the Bitcoin client of their choice. Fans can now use the virtual currency to purchase Dynamite’s increasing collection of digital comics and bundles, including this week’s latest digital comics bundle featuring 25 of Dynamite’s top comics for a discounted price of $10 to help commemorate Dynamite’s 10th Anniversary. A sweet Dynamite bundle at an incredible offer that adds up to only .40 cents a book! In addition, Dynamite’s DRM Free Digital Store showcases free wallpapers for fans to enjoy, with new ones added every week. These include Bob’s Burgers, Neil Gaiman’s Last Temptation, Red Sonja, Vampirella, Boys, Cryptozoic Man, Dresden, and this week adding Purgatori and other new wallpapers.

The bundle gives fans the opportunity to add award-winning art by Alex Ross, Gail Simone’s Red Sonja, Kevin Smith’s Green Hornet, Legenderry by Bill Willingham, Chaos! by Tim Seeley, and much more to their digital collections DRM-Free at a fantastic value. From debut issues of classic titles, to recent best-sellers that have sold-out in print. This new Dynamite Bundle continues the next phase of the Dynamite Digital program, with 10% of each sale going to the Comic Book Legal Defense Fund. This promotion is available to fans for a limited time.

“This is an exciting day here at Dynamite combining both, our accepting Bitcoin as an option for payments, and at the same time announcing our biggest introductory bundle to date to commemorate our 10th Anniversary. Setting up Bitcoin payments through our DRM-Free store has been a goal since Day One,” says Nick Barrucci, CEO and Publisher of Dynamite Entertainment. “As we continue to blaze a new trail with Dynamite Digital, we are proud to provide existing fans and expand our fan base with increasingly accessible means of participating in the digital comics experience, which — as recent data has proven — benefits the overall comics market through consumer transition to printed material.”

Dynamite’s CEO continues “We took a look at what fans kept asking for in creating an introductory bundle to allow them to try new titles at a great price, and combined 25 of our top selling books into a nice discount bundle to promote a nice mix of new titles at an incredible entry price point of $10.00 for our 10th Anniversary. Its Dynamite’s biggest deal yet offered directly from the Dynamite Digital DRM Free store, with quite a few pluses in supporting us through the bundle: Fans get to try great new books at an incredibly low price DRM-Free, they get to help support creators that we work with in addition to Dynamite, and help out the Comic Book Legal Defense Fund. A win all around for everyone!”

Introduced in 2009, Bitcoin is a software-based online payment system. Bitcoins are created as a reward for payment processing work in which users offer their computing power to verify and record payments into the public ledger. Payments work peer-to-peer, which is an exciting new way to purchase for consumers. The addition of Bitcoin to Dynamite Digital follows the news of Dynamite’s new discount digital bundle offerings, launched just last week.

This latest bundle includes award-winning titles from some of today’s best creators. Kevin Smith, Gail Simone, Bill Willingham, award-winning artist Alex Ross and more have multiple books included in the offer. Giving fans the perfect taste of everything Dynamite has to offer. The full list includes:

This new bundle follows last week’s limited promotion (which ended yesterday) of the 5 Star, 5 book starter set where fans were invited to pick up the top 5 best-selling books of Dynamite’s impressive library. This latest offer continues Dynamite’s commitment to fans as the publisher celebrates its 10 year anniversary this year.

Dynamite’s new online storefront has already proven to be a huge success with fans since it started in August of this year, featuring DRM-Free editions of some of Dynamite’s biggest hits to-date, including Bob’s Burgers, Alice Cooper, Dawn/Vampirella, and more.

For more on Dynamite 25 books for $10 bundle, and the latest DRM-Free offers from Dynamite Digital, check out http://dynamite.com/digital/ today.

Join the conversation on Dynamite Entertainment’s twitter page at http://twitter.com/DynamiteComics

About Dynamite Entertainment
Dynamite was founded in 2004 and is home to several best-selling comic book titles and properties, including The Boys, The Shadow, Red Sonja,Warlord of Mars, Bionic Man, A Game of Thrones, Bob’s Burgers, and more.  Dynamite owns and controls an extensive library with over 3,000 characters (which includes the Harris Comics and Chaos Comics properties), such as Vampirella, Pantha, Evil Ernie, Smiley the Psychotic Button,Chastity, and Peter Cannon: Thunderbolt.  In addition to their critically-acclaimed titles and bestselling comics, Dynamite works with some of the most high profile creators in comics and entertainment, including Kevin Smith, Alex Ross, Neil Gaiman, Andy Diggle, John Cassaday, Garth Ennis, Jae Lee, Marc Guggenheim, Mike Carey, Jim Krueger, Greg Pak, Brett Matthews, Matt Wagner, Gail Simone, Steve Niles, James Robinson, and a host of up-and-coming new talent.  Dynamite is consistently ranked in the upper tiers of comic book publishers and several of their titles – including Alex Ross and Jim Krueger’s Project Superpowers – have debuted in the Top Ten lists produced by Diamond Comics Distributors.  In 2005, Diamond awarded the company a GEM award for Best New Publisher and another GEM in 2006 for Comics Publisher of the Year (under 5%) and again in 2011.  The company has also been nominated for and won several industry awards, including the prestigious Harvey and Eisner Awards.