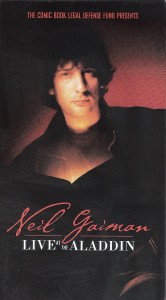 No stranger to book censorship, Neil Gaiman’s works are among some of most beloved — and banned — books in the United States. Last year, CBLDF rose to defend his acclaimed novel Neverwhere against an attempted ban in New Mexico. Gaiman’s seminal graphic novel series Sandman has endured a wide range of challenges since its initial publication, leading CBLDF to today begin releasing a set of discussion guides to aid educators in teaching this important series. Today’s reissue of Live at the Aladdin supports CBLDF’s important efforts like these protecting the freedom to read!

A bestselling and iconic author, Neil Gaiman has a long history of support for CBLDF, today serving as co-chair of the Fund’s Advisory Board. In 2000, he raised money for the Fund on the Last Angel Tour, reading several short stories live at fundraising events across the nation. The final stop was at the Aladdin Theatre in Portland, Oregon, in 2001, and it was recorded for posterity and released on VHS. Long out of print, this event is now available again as an audio download!

This event featured live readings of “Chivalry” and “Being an Experiment Upon Strictly Scientific Lines Assisted by Unwin’s Limited Wine Merchants of Uckfield” and much more!

Available for a $5 donation, this download can be found here: http://cbldf.podbean.com/e/bonus-episode-neil-gaiman-live-2001/

If you have never had a chance to hear Gaiman read his works, it is a wonderful experience, and we are pleased to offer an earbud-ready version of Live at the Alladin for a small donation. This is a great way to participate in Banned Books Week, listening to one of censorship’s most ardent opponents!

(All content as read by the author on this recording is TM and © Neil Gaiman 2014.)