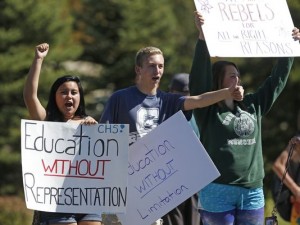 By now most readers have probably heard about the proposed curriculum review committee in the Jefferson County, Colorado, school district. Over concerns that such a committee will censor educational content, CBLDF has joined a coalition led by the National Coalition Against Censorship to protest the move.

Starting with Advanced Placement U.S. History, the committee would be tasked with ensuring that the district curriculum promotes “patriotism, respect for authority and free enterprise.” According to the proposal currently before the school board, that means that educational materials which “encourage or condone civil disorder” would come in for particularly close scrutiny.

Unsurprisingly, Jefferson County teachers and students are protesting this attempt to curtail their academic freedom — and they’re doing so through civil disobedience. Two high schools cancelled classes on September 19, when teachers stayed home in protest. Momentum spread among students via social media over the following weekend, and many of them walked out of school to picket nearby on September 23 and 24. Some media outlets have accused them of only wanting to get out of class, but in comments to the New York Times, protesting students demonstrated a nuanced understanding of exactly why free inquiry is necessary to the study of history. Senior Leighanne Grey noted that “as we grow up, you always hear that America’s the greatest, the land of the free and the home of the brave. For all the good things we’ve done, we’ve done some terrible things. It’s important to learn about those things, or we’re doomed to repeat the past.”

Grey is right on the nose. For much of U.S. history, the curricular canon said that Christopher Columbus “discovered” this continent. It focused little attention on the contributions of marginalized Americans including women, persons of color, and LGBT individuals — and even less on the battles that each group had to (or still does) wage just to use the inalienable rights described in the Declaration of Independence. As Martin Luther King, Jr., pointed out in his “Mountaintop” speech the night before he was assassinated, civil disobedience is in fact one of the most patriotic acts an American could undertake:

Under Jefferson County’s proposed review process, all evidence of the ultimate expression of First Amendment principles could be erased from the AP U.S. History curriculum. Supplemental texts like that very speech by King, in which he also exhorted civil rights protesters to “develop a kind of dangerous unselfishness,” and even graphic novels such as John Lewis’ March, would undeniably “encourage or condone civil disorder” — because civil disorder has often been the only nonviolent route to fairer treatment under the law for all Americans.

Today, CBLDF joins the National Coalition Against Censorship, the ACLU of Colorado, the National Council for the Social Studies, the National Council of Teachers of English, the American Booksellers Foundation for Free Expression, PEN American Center, and the Society of Children’s Book Writers and Illustrators to register our grave concern about the proposed standing review committee in Jefferson County. Teachers must be able to teach and students to learn in an environment free from the chilling effect that such oversight would cause. To that end, below is a letter signed by CBLDF and seven other organizations urging school board members to reject the proposal and uphold academic freedom in their district.