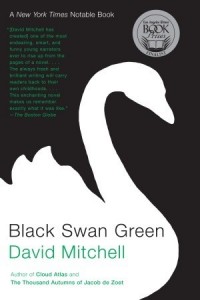 Some parents in central California’s Kings Canyon Unified School District are demanding the removal of David Mitchell’s novel Black Swan Green from the high school curriculum, with one father calling the book “inappropriate, amoral and disgusting.” District officials point out that students only read excerpts from the book for class, but it apparently was already removed from a high school library without following a challenge policy.

Although the book as a whole contains a sex scene and some profanity, students in a 9th grade English course read only two portions of the text. According to the Reedley Exponent newspaper, neither of the excerpts “deals with sex or other objectionable material.” Nevertheless, about 50 people attended a September 23 school board meeting to demand that Black Swan Green no longer be used in classrooms. Parent Laura Kanawyer expressed concern that students who read excerpts in class might be lured into reading the whole book outside of class–and if that happens, they “could very well get their hands on the worst language I have seen . . . and the most graphic scenes of lust and fornication.”

The Exponent also mentions in passing that the book was already removed from the library at Orange Cove High School. The district’s website apparently does not include a full listing of its policies, so we do not know if a challenge policy was ignored in this case–but such a removal in response to a few parent complaints would certainly be unconstitutional.

As for the excerpts that students read in class, school board president Noel Remick said that a review committee has been formed and will make a recommendation to the superintendent. The issue may then proceed back to the school board, presumably if parents are unhappy with the recommendation and decide to appeal.

This is a book we hadn’t seen challenged before, but here is a fine counterpoint to the bombastic descriptions of a small part of the content from Kings Canyon parents. In a 2012 review from Slate, high school English teacher Jessica Roake hailed Black Swan Green as the rightful classroom heir to J.D. Salinger’s The Catcher in the Rye, which many teens today find uninteresting. Summing up her enthusiastic recommendation that other teachers incorporate the newer novel into their curricula, she said:

When I taught Black Swan Green, I got everything I’d missed with Catcher in the Rye and more: The students found it funny, painfully true, deeply entertaining, and strangely beautiful, and they discovered in [main character] Jason a kindred literary soul to love. And when the year was over, and the staff cleaned out old, abandoned texts from students’ lockers, it was the one book no one had left behind.

← A Discussion Guide that Protects the Right to Read!
Facing Off in Jefferson County →