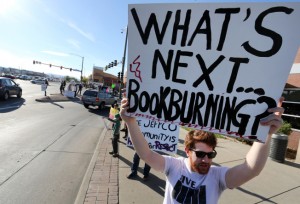 Jefferson County, Colorado, has found itself the unlikely center of a debate over censorship and academic freedom, a fight characterized by some expected — and not so expected — players. On one side, we have a retired history teacher. On the other, we have a vocal group of parents. The sides they picked may come as a surprise.

Retired AP history teacher Larry Krieger is on a crusade that started in OCtober 2012 with the release of the revised framework for AP history. One might expect it’s a crusade against factual inaccuracies and biased material, but Krieger is specifically opposed to what he considers an unpatriotic and revisionist bent in the College Board’s new guidelines. Caitlin MacNeal with Talking Points Memo identifies what concerns Krieger:

…he is concerned that the College Board left out major Founding Fathers and key works like that of Alexis de Tocqueville, along with other important figures and events. He is also concerned that the framework draws a negative picture of the U.S. from a global perspective.

Krieger and other critics have complained that the course places too much emphasis on topics like slavery and the Japanese internment camps during World War II. Krieger said that he believes students need to learn about these “areas where we’ve fallen short of our ideals,” but that he is asking for “a balanced presentation.” 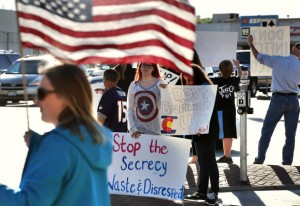 Kreiger continually argues that “American exceptionalism” — the idea that the U.S. is qualitatively better than other contries — is being scrubbed from cirricula despite years as the “standard, traditional, widely accepted approach.” Kreiger found a formidable partner for his crusade in anti-Common Core campaigner Jane Robbins, and together they have gained the support of school boards in Texas and Colorado, and even earned condemnation for the AP framework from the Republican National Committee. It is Kreiger’s success campaigning against the College Board framework that led to the Jefferson County school district’s proposal for a curriculum review committee that will review the AP history program to ensure it promotes promotes “patriotism, respect for authority and free enterprise.”

So who is standing against Kreiger? The Jefferson County school board may be in his pocket, but parents, teachers, and students in the district have engaged in “civil disorder,” taking to the streets and national airwaves to protest the attempts to curtail academic freedom in the district. In comments to the New York Times, protesting students demonstrated a sophisticated understanding of the risk the proposed curriculum review board poses. Senior Leighanne Grey noted that

“…as we grow up, you always hear that America’s the greatest, the land of the free and the home of the brave. For all the good things we’ve done, we’ve done some terrible things. It’s important to learn about those things, or we’re doomed to repeat the past.”

For months now, parents who disagree with the board’s plans – to hire a board attorney, scrap funding to expand free, full-day kindergarten, reallocate mill levy funds, and now consider altering the AP history curriculum – have fought to make their voices heard by our school board majority. We have written letters, we have spoken at board meetings, filled out school district surveys, participated in community forums, spoken with the local news media, written opinion pieces, even gathered for public protests.

Patterson also speaks frankly of the opposition she has faced as a result of the PTA’s fight against the proposed curriculum review committee, which has been ongoing since last year:

At first, the harassment had what I suspect is its intended effect. I wanted to disappear, I wanted to be left alone. I wanted it to stop. It’s not easy to watch people you don’t even know call you names, twisting your words, going out of their way to slander you. In the end, though, none of this is really about me and, with the support of my board and community, I found my strength. This is about our children, about their lives, their education, their future. And for those of us committed to PTA’s mission, there is no greater purpose or nobler cause.

The actions of the Jefferson County school board could lead to the censorship of other programs and supplemental texts, including graphic novels that “encourage or condone civil disorder,” such as John Lewis’ March, Ho Che Anderson’s King, Kyle Baker’s Nat Turner, Mark Long’s The Silence of Our Friends, and many more. So, CBLDF also joined the opposition to the Jefferson County school board by signing a letter from the National Coalition Against Censorship. We were joined on the letter by the ACLU of Colorado, the National Council for the Social Studies, the National Council of Teachers of English, the American Booksellers Foundation for Free Expression, PEN American Center, and the Society of Children’s Book Writers and Illustrators.

Unfortunately, the efforts of parents, students, teachers, the PTA, and a coalition of anti-censorship groups did little to sway the school board: A week ago, the plan to review the AP history curriculum was modified but not entirely defeated. Patterson probably sums up the impact of the defeat best:

Our children are so much smarter, so much wiser than we often give them credit for. Standing up for what we believe in is not the easy thing to do. It’s hard. It takes courage and resolve. That our children here in Jefferson County understand their First Amendment rights so well, that they continue to fight in the face of defeat, is a testament to our public education system.

Betsy Gomez is the Editorial Director for CBLDF.