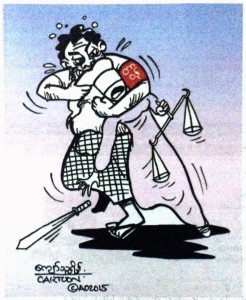 The nation of Myanmar has only had an independent press for three years, since the longtime military junta began transitioning to a civilian government. In that short time, though, a new generation of cartoonists has arisen to document and respond to the bumps and triumphs on the road to democracy. While they’re still on the receiving end of a fair amount of censorious pressure and intimidation, many of the younger cartoonists have found that sharing their work online allows them to reach a much larger audience and sometimes escape the notice of authorities.

Even under the junta when the press was government-controlled, there were cartoonists working in Myanmar, says a recent article by Poppy McPherson in The Diplomat. One of those was Aw Pi Kyeh, who began his career in the 1970s and estimates he’s had 300 cartoons banned since that time. Often authorities accomplished this by ripping his work right out of newspapers: “If they understand, they censor; if they don’t understand, they censor. The other cartoonist, on the back of my cartoon, he is unlucky.”

Although cartoonists have miraculously managed to escape prosecution in recent memory, they’re still aware of being watched constantly. One of the younger generation, Salai Suanpi, mocked the military in a 2013 cartoon and promptly received an email threatening him with jail time. He told McPherson:

They are always watching our cartoonists. If you write down text, a lot of people won’t read it. But if you do cartoons they see it…They say there is freedom, but still this kind of thing is happening to a lot of cartoonists in Myanmar.

Another young cartoonist, Kyaw Thu Rein, admitted that “I don’t believe in media freedom 100 percent now, so I create my cartoons very carefully. I take care to create cartoons not to anger the government, just to make them know what is happening in real life.” He says skewering religion à la Charlie Hebdo, for example, simply is not possible in Myanmar.

But when protesting students were recently met with violence from a government militia, cartoonists were the first to document it via social media. Aw Pi Kyeh was impressed at his younger colleagues’ promptness in spreading the news worldwide, saying “they are very good people, they are dutiful.” Indeed, the future looks bright for cartooning in Myanmar–but if the government wants to demonstrate its commitment to democracy, it could start by tolerating and even welcoming dissent in the form of drawings.

← CBLDF Heads to Seattle This Weekend for Emerald City Comicon!
Wallingford Superintendent Refuses to Back Down on Perks Ban →