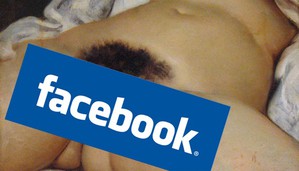 Recently, a Parisian court assented to hear the case of a French primary school teacher who is suing Facebook after his account was suspended in 2011 for posting an image of Gustave Courbet’s notorious painting L’Origine du monde, which shows a closeup of a woman’s nether regions. While this may initially appear to be a victory for freedom of expression, legal experts fear that it could actually lead to a jurisdictional nightmare whereby Facebook could be sued in courts around the world rather than in its domicile of California, as its own Terms of Service require. It’s not difficult to imagine how this could result in an increase of censorship rather than the opposite.

As has been proven many times over, Facebook’s standards regarding nudity are inconsistently enforced and seem just a bit prudish even in the United States, let alone in France. L’Origine du monde (The Origin of the World) has run into trouble on the social network before, leading to the suspension of accounts belonging to a Danish artist in 2011 and a Swiss newspaper in 2012. It was also in 2011 that the plaintiff in the current lawsuit, Frédéric Durand-Baissas, posted a link on his page to a documentary about the history of the painting that had aired on the joint French-German TV channel Arte. The image automatically appeared with the link, and Durand-Baissas soon found his account suspended. He is suing for about $22,000 in damages, in addition to having the account reinstated.

Although we would very much like to see Facebook be more transparent about what its content moderation standards actually are, and provide an appeals process for users like Durand-Baissas, we fully accept that it is a private entity which does have the right to control what appears on its site. Every user who opens an account agrees to the Terms of Service, even if the vast majority don’t actually read them. Apart from the content standards, the TOS also include the proviso that any legal dispute will be settled in California courts, but the Paris court last week ruled that requirement to be “abusive.” An article in the Washington Post sums up the pitfalls of the Durand-Baissas case:

In much of the world, the fact that Facebook has the final say over content moderation is critically important to dissent and free speech. The alternate vision that our Courbet-posting friend has pitched is seductive, maybe, to those who think Facebook is too powerful, or conservative, or something else entirely. But calling on local governments to police the site’s policing seems, on balance, even more risky.

As we have seen over the past few months in the wake of the Charlie Hebdo attack, even France has its own bugaboos regarding free expression which often seem unnecessarily repressive in American eyes. Now extrapolate that to every country where Facebook has a presence, urges the Telegraph:

If Californian technology companies can be sued in other countries, imagine the possibilities: Russian users suing the company for not removing what they consider to be pro-Ukranian propaganda, or Saudi Arabian users starting proceedings because Facebook allows pork products to be advertised.

With so much expression today residing on various social media sites, it is easy for users to lose sight of the fact that they are not public fora and can make their own rules as to what is allowed. In fact, since 2011 Facebook has relaxed its standards regarding “art nudity” somewhat, and might allow L’Origine du monde to pass. (Which is not to say that an overzealous frontline moderator wouldn’t still flag it initially.) While we certainly applaud the platform making that choice independently, we would never advocate that it be enforced by any government at the risk of free expression.