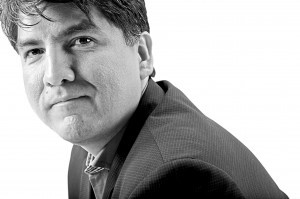 Nearly a year after his book The Absolutely True Diary of a Part-Time Indian was temporarily banned from a supplemental reading list in a Boise-area school district, Sherman Alexie last week spoke before a capacity crowd of 800 at the city’s Egyptian Theatre. He had a message for would-be censors across the nation: Their efforts only make him stronger.

Every time his book gets banned or challenged — which happens a lot — Alexie hears from fans and friends concerned he might feel hurt by the controversy. In fact, he said, “I’m not. When my books get banned, I sell so many; the exact opposite thing the banners want.”

Alexie also gave all due praise to Brady Kissel, the high school student who not only defended Absolutely True Diary before the Meridian School Board, but also helped to organize a World Book Night giveaway of free copies. As Kissel and two employees of a local bookstore were handing out books, an unknown citizen called police on them for distributing literature to teens without their parents’ permission. Luckily the officers saw that nothing nefarious was going on and allowed the giveaway to proceed.

Although Alexie is by now used to — and more than a little amused by — the accusation that he or his book have a corrupting influence on youth, he said the Idaho case was heartening because others from the community rallied to support him and free expression in general: “I think the reaction was so hateful from the banners that the love reaction among the literary folks in Idaho matched it. That hasn’t happened before.” And of course it doesn’t hurt that the controversy undoubtedly gained him some new readers in Idaho and elsewhere!