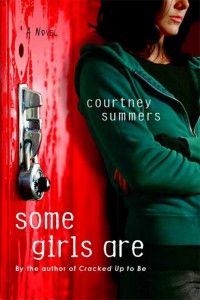 CBLDF has joined a coalition led by the Kids’ Right to Read Project to protest a principal’s actions at Ashley High School in Charleston, South Carolina. Based on a complaint from one parent and in violation of district policy, Principal Lee Runyon removed Courtney Summers’ Some Girls Are as a summer reading option for freshman Honors English.

Summers’ book is about a high school senior who is ostracized and bullied by her former friends after she reports an attempted rape by a popular boy. Initially, incoming Honors English I students could choose to read either Some Girls Are or Rikers High, about a 17-year-old boy attending high school inside Rikers Island prison while awaiting trial for a minor infraction. In a letter to the editor of the Post and Courier newspaper, parent Melanie MacDonald said she and her daughter both downloaded Some Girls Are to their Kindles, planning to read it at the same time. Before long, however, MacDonald reported that “my jaw dropped and I was appalled and disgusted that my child (make no mistake that high school kids are still children) had been assigned this as required reading.”

In her letter, MacDonald objected to the book’s depiction of underage alcohol and drug use, sexual assault, a lecherous male teacher, “body shaming about the size of the lead character’s breasts, and then a sexual reference so explicit that I will not reference it here.” In a follow-up article from the Post and Courier, MacDonald says although she confiscated her daughter’s Kindle, she has finished reading the book herself and “it doesn’t get any better.”

When MacDonald communicated her concerns to school officials last week, the WAHS English Department initially responded by adding a third option to the reading list: the 1943 classic A Tree Grows in Brooklyn. Although MacDonald and her daughter now have two alternatives to Some Girls Are, she then filed a formal challenge to the book. Although Charleston County School District’s challenge policy says that the school board should make the final decision “based upon careful examination and study of the challenged material,” Runyon said he pulled the book because “we felt like we needed to try to accommodate the parent’s concerns, which had some validity, and make a common-sense decision.” After Runyon pulled the book, he consulted with district English teachers and replaced it with Laurie Halse Anderson’s Speak — which explores themes similar to Some Girls Are and is a frequently challenged book itself.

In the letter, KRRP reminds Runyon that his actions are in violation of both school policy and constitutional principles:

Removing a book from an assigned summer reading list less than three weeks before the start of the school year is unfair to all those students who already read the book and completed the assignment. Adding a third option to the list should have assuaged the concerns of any parent objecting to Some Girls Are.

Decisions about instructional material should be based on sound educational grounds rather than an individual’s disagreement with its message or content. Following a transparent reconsideration policy with an eye towards this approach is consistent with constitutional and educational principles and will serve the interests of both West Ashley High School and its students. We urge you to demonstrate your commitment to these goals by following established procedure to review the complaint regarding Some Girls Are and, in the meantime, restoring the book to the summer reading list.

The entirety of the letter follows.

NCAC Letter to Charleston, SC: Some Girls Are