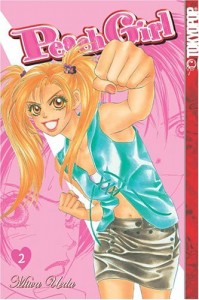 In anticipation of the young-adult-themed Banned Books Week starting this Sunday, YA author Amy McNulty recently shone the spotlight on some of her favorite manga series for teens that have faced challenges in the United States. In a guest post on poet and fellow author E. Kristin Anderson’s blog, McNulty pleaded for adults to understand manga in cultural context.

The first informal challenge that Mcnulty covers happened in 2005, when a parent in Orange County, Florida complained that her 11-year-old daughter was able to check out a volume of Miwa Ueda’s series Peach Girl from a branch of the county library system. Unfortunately local news station WKMG’s story on the controversy has long since been taken down, but a second-hand report from Anime News Network indicates that the station covered the mother’s complaint as part of a regular feature called “Problem Solvers.” In time-honored local news fashion, though, it seems that WKMG only caused more problems by exploiting the story for shock value.

Even though Peach Girl was correctly shelved in the Young Adult section and carries a publisher’s suggested age rating of 13+, and a librarian told WKMG that the responsibility for screening what minors check out lies only with their own parents or guardians, the news station decided to see what other “shocking” titles could be found in the Young Adult manga. A reporter alluded to another series “involving parents who couple swap,” which Anime News Network surmised to beMarmalade Boy by Wataru Yoshizumi. This happened to be one of McNulty’s favorites as a teen, and she says while that description is strictly accurate, the novel proclivities of protagonist Miki Koshikawa’s parents are not treated explicitly, nor are they in the foreground of the series, which focuses more on “high school friendships and romantic entanglements.”

The other challenged manga that McNulty discusses is one we’ve featured here many times: Death Note by Tsugumi Ohba and Takeshi Obata. In the series, main character Light Yagami finds a magical notebook and discovers that anyone whose name is written inside will die. As the story develops, he resolves to use his power only “for good”–and then struggles to define what that might mean.

At least nine times in the past eight years, U.S. students ranging from elementary to high school have been disciplined, suspended, expelled, or arrested after they were found to be in possession of “death notes” apparently inspired by the manga or its anime spinoff. In 2010 the manga series was formally challenged by the mother of an Albuquerque high school student, but a review committee unanimously voted not to ban it. Committee member Tom Genne saw deeper than the morbid premise of Death Note, remarking that “high school age kids do grapple with questions about justice and morality, and whether civilization, or the societies of which they are a part…, are making good decisions.”

In sum, McNulty warns against judging manga based on the synopsis alone, or without at least a modicum of cultural understanding:

Instead of calling for the ban of any title, it’s up to parents to decide what they think is appropriate for their own kids—not what they want other people’s kids to read. On the other hand, I suggest parents read a title themselves and decide if maybe it has more value than it seems to based on plot synopsis alone. I read manga all through my middle and high school years (and beyond), and I can tell you all it did was make me a better and more imaginative writer with a passion for stories in all genres.

For parents, educators, and librarians who do want to learn more about manga, look for our guide CBLDF Presents Manga: Introduction, Challenges, and Best Practices. Check your local comic shop or buy it here!