Did you know that someone was foolish enough to try to raise the brutal hand of censorship to Monty Python and the Holy Grail — one of the most iconic and most quoted films in cinematic history? Cinema Blend revealed a letter from producer Mark Forstater that tells the story of how the Monty Python team saved their motion picture from the British Board of Film Censors.

In 1974, just a few short months before the film was officially released, Forstater was approached by a representative of the British Board of Film Censors regarding the film’s possible rating and what the Monty Python crew could do if they wanted to receive a general A rating (the equivalent of a PG) as opposed to the harsher AA (PG-13) the representative was offering. “He thinks the film will be AA,” writes Forstater, “but it would be possible, given some dialogue cuts, to make the film an A rating, which would increase the audience.”

Forstater decided to “negotiate,” but in the fashion of classic Monty Python wordplay, actually talked the BBFC into giving the film a better rating without losing many of the jokes that make it so quotable:

I would like to get back to the Censor and agree to lose the shits, take the odd Jesus Christ out and lose Oh fuck off, but to retain ‘fart in your general direction’, ‘castanets of your testicles’ and ‘oral sex’ and ask him for an ‘A’ rating on that basis.

And the Board agreed! In what could have been a disaster that castrated the beloved film, Forstater and the Monty Python crew managed to defend the integrity of their work and their right to free speech.

As Conner Schwerdtfeger writes for CinemaBlend, “Sometimes it genuinely seems baffling that there exists a board of people who live to determine a work of art’s decency based on the number of ‘shits’ or fart references.” But British censors remain active today and continue to have a long reach. Earlier this year, the film adaptation of Phoebe Gloeckner’s graphic novel The Diary of a Teenage Girl was given an 18+ rating by the British Board of Film Classification for “strong sex scenes [that] include mechanical thrusting, breast and buttock nudity, and implied oral sex.” In response, director Marielle Heller argued that other films exploring the sexual awakening of boys as opposed to girls had been given a more lenient rating. Despite this fact, though, BBFC stuck by their guidelines and the film debuted with the equivalent of an R rating.

Movies aren’t the only victims of British censors. In 1984, a portion of an exhibition at Ferens Gallery in the UK was shut down for displaying comic artist Sue Coe’s controversial art piece “The Rape of Rosa Velez” which depicts the rape of a woman on a pool table. The brightly colored, dreamy, and explicit images that graced the 36 pages of Melinda Gebbie’s Fresca Zizis would caught the eye of UK censors in 1985 when Knockabout Comics imported 400 copies of the book in 1985. The books were seized by UK customs for pornographic images, and despite Gebbie’s eloquent defense of the book during the subsequent obscenity trial, British authorities ruled that the copies should be confiscated and burned. Possession of the comic remains a crime in the UK today.

Fortunately for us, the Monty Python crew was able to keep censors from ruining their work. Read the full letter below. 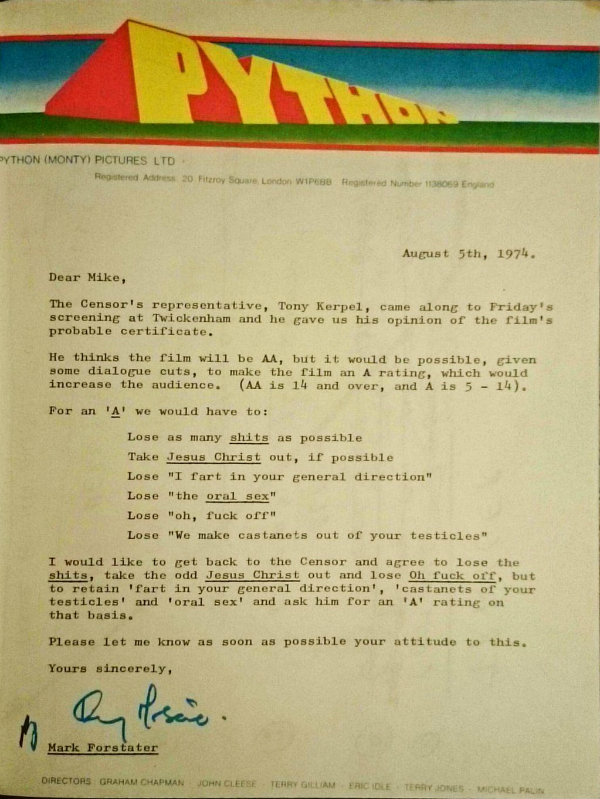 ← LAST DAY FOR CHRISTMAS DELIVERY — Get in the Spirit of Giving with Signed Graphic Novels!
CBLDF Joins Coalition in Defending The Adventures of Huckleberry Finn →