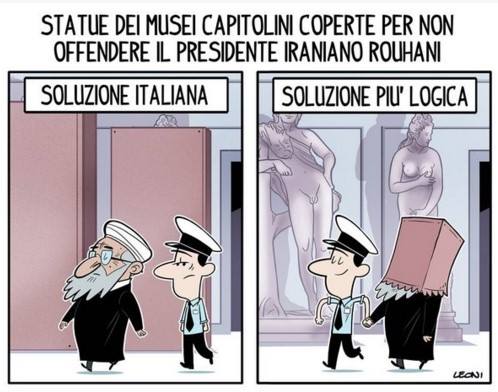 Cartoonist Walter Leoni mocks the “Italian solution” to the possible offense nude statues in Rome’s museums might cause the Iranian president with the “logical solution” of a paper bag. © Walter Leoni

After the Italian government covered up ancient nude statues ahead of a state visit from Iranian President Hassan Rouhani last week, cartoonists are having much fun at officials’ expense, but also leading a debate regarding freedom of expression on the world stage.

Nude statues along a corridor at Rome’s Capitoline Museums, where Rouhani and Italian Prime Minister Matteo Renzi appeared in a joint press conference on Monday, were covered head to toe in plain white boxes. Most media reports agree that no one in the Iranian delegation requested the censorship, but that Italian government officials made the call out of an abundance of caution.

Jordan-based news site Al Bawaba has collected some of the Italian cartoon reactions to the literal government cover-up, including the one by Walter Leoni, shown here. As Rouhani was continuing on to France after his visit to Italy, embarrassed Italians pointed out that such extremes of modesty would be unthinkable for their neighbors to the north. “I wouldn’t believe they would cover statues even if I saw it with my own eyes,” Italian Stefano Dorelli told The New York Times.

The handling of nude statues in the United States is another matter, however. In 2002 under then-Attorney General John Ashcroft, the Department of Justice famously spent $8,000 on drapes to cover two semi-nude statues in the building’s Great Hall, allegedly because Ashcroft “didn’t like being photographed in front of them” during press events. The statues were uncovered in 2005 when Ashcroft was succeeded by Alberto Gonzales, although they are sometimes temporarily covered to this day.