Despite a vague federal law that professes to protect children from harmful information, Russian mother and author Anna Starobinets didn’t let censorship stand in her way when it came to publishing her newest children’s book, Beastly Crime Chronicles.

In a recent editorial piece on The Guardian, Starobinets recounts her experience working with Russia’s largest publisher, which chose to protect their business over the integrity of free expression. The author, who has written numerous books for adults and is known best for her dystopian horror fiction, decided to delve into writing children’s books when she realized that there was a noticeable dearth of native Russian stories available.

“I wrote my first children’s book, The Land of Good Girls, in 2009 for my then five-year-old daughter Sasha for quite a banal reason,” recounts Starobinets. “I’d already read to her everything that was worth reading in Russian for children her age. We had read older literature and contemporary authors as well but new titles from Russian authors came out far too rarely to satisfy my daughter’s thirst for reading (she could consume upwards of five books a day!).”

In light of this situation, Starobinets would go on to write two children’s books — Land of Good Girls and Catlantis — that take place in a contemporary Russia but follow the adventures of family pets Bonehead the dog and Baguette the cat as they try to save their young owner Polina from a “totalitarian-utopian otherworld.” Although the books faced scrutiny by publishers, they were ultimately published. It wasn’t until she tried to have Beastly Crime Chronicles published that Starobinets ran afoul of federals laws that directly regulate content that can be published and disseminated to children. 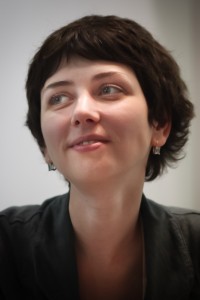 “When I wrote Land of Good Girls I had already published a number of books for adults, which were receiving good press and selling well,” writes Starobinets. “It seemed that there wouldn’t be any obstacles to publishing a children’s book,” adding:

However, it turned out that the children’s publishers in Russia were extremely conservative. It was suddenly clear why there were so few contemporary Russian children’s books that were good. Time and time again, publishers preferred to reissue Russian folk tales, translated classics, or a translated bestseller, or worse: to publish some horrible Russian parody of Harry Potter rather than come out with something worthwhile and new. They were scared.

The law that had Russian publishing houses so scared was the 2010 version of Federal Law of Russian Federation no. 436-FZ “On Protection of Children from Information Harmful to Their Health and Development.” According to the law, “it is forbidden to distribute among children any information that: may entice the desire to use drugs, tobacco products or alcohol; condones or supports violence or brutality; goes against family values.”

The vagueness of the law and what could be interpreted as “harmful information” had numerous publishers closing their doors to new work. Beastly Crime Chronicles has noir-style illustrations and follows woodland creatures as they solve mysteries. With titles like “Inside the Wolf’s Den” and drinks like “Mothitos” (or fermented autumn moths), publishers didn’t want to risk legal repercussion by publishing Beastly Crime Chronicles.

Despite being turned away by multiple publishing houses, Starobinets did find Clever, a smaller publisher that has printed the first book.

Although Starobinets beat censorship with persistence, this is not the first time Russia has erred on the side of caution and had books either not published or distributed as a result of vaguely-worded laws. Last year, art spiegleman’s Pulitzer Prize winning graphic novel Maus was pulled from a major Russian bookstore chain due to the depiction of a Nazi swastika on the cover. Russian law prohibits the display of Nazi propaganda and overzealous retailers interpreted the explicitly anti-Nazi graphic novel as somehow pro-Nazi despite the fact that the book has been being sold in Russia since 2013.

Whether it be misinterpreting the content of a book based on its cover or outright refusing to print a children’s book because the illustrations might be “harmful information,” the implementation of rules and regulations designed to protect children sounds an awful lot like the Comics Code of 1954 — and we know where that got us.

Starobinet’s first book is doing well now that it’s on the market. “The first book, Inside the Wolf’s Den, was published with noir-esque comic illustrations and has successfully reached bookstores,” notes the author. “So far, none of my readers’ health nor development have been harmed.”