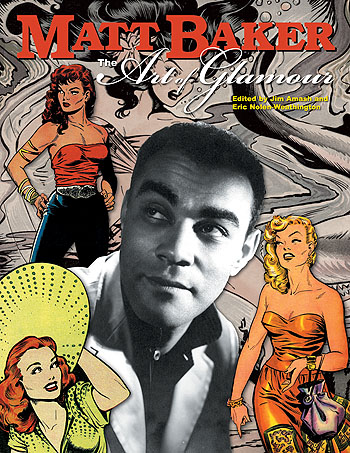 Matt Baker surrounded by his glamorous gals on the cover of TwoMorrow’s Matt Baker: The Art of Glamour

In the 1940s and 1950s, Clarence Matthew Baker — best known as Matt Baker — was widely regarded as the master of the “good girl” style and is credited as the first successful Black comic book artist in the comics industry.

From Phantom Lady (Fox Features Syndicate, 1947) and Canteen Kate (St. John, 1952), to what many consider the first graphic novel, It Rhymes with Lust (St. John, 1950), Baker’s fun-loving, glamorous gals and classy, statuesque women could be seen on every newsstand across the United States (and most likely in many G.I. quarters overseas). Although, Baker was celebrated in the comics community for his strikingly beautiful and more anatomically correct portrayals of women, his art would also become one of the primary targets in the crusade against comics and in the infamous Dr. Fredrick Wertham’s 1954 book Seduction of the Innocent.

Though much isn’t known of his childhood, Baker would become a celebrity amongst his peers in New York City, where he moved to in 1944 to attend art school, not only for his art, but for the fashionable way that he tailored and carried himself — a trait that publishers and other artists of the time jokingly claim helped him win the ladies and “inspiration” for his art. “He had a gift for drawing anything well and women extraordinarily, which helped him avoid the steel mills that awaited other young Negro men of his time and place,” writes David Hajdu of the artist in his book The Ten-Cent Plague. Hajdu elaborates: 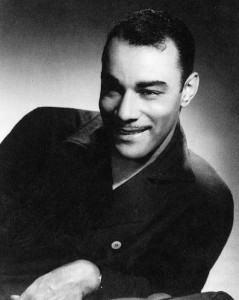 Matt Baker, the “envy of everybody.”

Matt Baker was a tall, sturdy, vigorous, handsome man with a gentle, closed-mouth smile, deep gaze, and dark-coffee complexion. “He could have been a movie star or a model,” recalled Bob Lubbers, who worked with Baker at Fiction House. In a rough and casual business, Baker was always dressed impeccably in broad shouldered, double-breasted suits and stylish silk ties. He had at least four fedoras, in brown, black, green, and maroon, which he wore to match his suits. He lived in Harlem, probably alone, presumably well, and he drove a yellow convertible coupe.

“All the women, white and black, went crazy for him, and I know he had a bunch of gals on the hook,” Lubbers said. “You know how he drew women perfectly? The anatomy was magnificent, down to every muscle. Everyone who knew him knew that could only come from exhaustive personal research. He was the envy of everybody.”

As classy as the women he drew, Baker primarily worked as a freelance artist during the 1940s and 1950s for some of the largest comic book publishing houses. As a freelancer, Baker was able to jump from project to project, working on a variety of titles and genres while continuing to master what has become his quintessential “good girl” art style. Sporting an impressively large portfolio, considering the short span of his career, Baker produced more than 1,000 individual comic pages and over 200 comic covers between 1948 and 1954.

From adventurous ladies in comics like Sky Girl (Iger Shop) and Sheena, Queen of the Jungle (Fiction House), to the women of war like Canteen Kate and those in Wartime Romances (St. John), Baker drew women from literally all walks of life, dominated any genre he worked in, and quickly became one of the most sought-after artists in the industry. 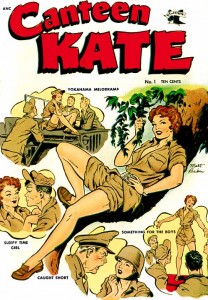 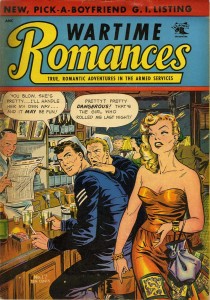 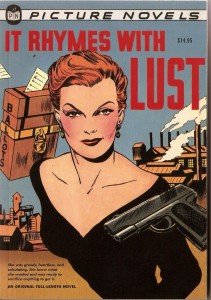 It Rhymes with Lust (St. John, 1950), credited as the first graphic novel.

Although he had worked for many publishers, Baker really found a home in the progressive publishing house of St. John Publications. It was here that he would illustrate what many consider to be the first graphic novel (or what the writers of the book, Arnold Drake and Leslie Waller, would call a “picture novel”), It Rhymes with Lust. “We were extremely fortunate to have him, and St. John is to be admired for having hired him in the prejudiced climate of the time,” said Drake.

Being in hot demand was how Baker would come to work on the comic for which he is best known, Phantom Lady. Published by Fox Feature Syndicates, Baker worked on the book from 1947 through 1949. Although the comic had already been running for 12 issues, Baker took over illustrating the series at issue #13, and he overhauled Phantom Lady’s design and gave her the classic look we have come to associate with the character.

“When Victor Fox of Fox Features Syndicate asked the Iger Studios to furnish him with a sexy female costumed hero, Iger sent him Phantom Lady and assigned Baker to the artistry,” writes Gaius Chamberlain for Great Black Heroes. “Baker immediately made changes to the character and her costume. He put her in blue short-shorts with slits up the sides and a matching halter top. He gave her a belt in front and a dramatically plunging neckline along with a scarlet cape.” Now the Washington socialite fought crime in style, and fans loved it! 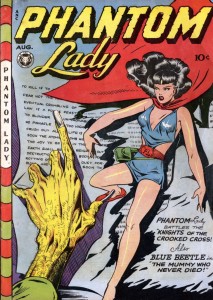 The buxom beauty that Baker created would not only attract the attention of fans, though. In 1954, Brooklyn-based child psychologist Dr. Fredrick Wertham published his book Seduction of the Innocent. A “report” on the ill effects of comic books on children’s psychological development, the book would become the foundation for the 1945 Senate Subcommittee hearings on comic books and juvenile delinquency — the hearings that would lead to the creation of the Comics Code Authority (CCA) and decades of mandated censorship of the comic book industry.

In the book, Wertham argued that comics not only perverted children’s minds, but also fetishized women and promoted — even encouraged — sadistic and deviant behavior, often applied towards those fetishized women. With alleged “case-studies” of real-life child patients, Wertham built his case around the idea that subliminal messaging in the artwork, or “pictures within pictures,” as Wertham described it, depicted genitalia that encouraged sexual deviance. He also claimed that even the explicit, over exaggeration of breasts and the female body drove children to become “sex maniacs.”

The comic cover that he singled out as an example of an image that promoted “sexual stimulation” and sadistic behavior was Baker’s cover of Phantom Lady #17. Depicting the character tied to a pole, her chest slightly pushed out, Wertham included the following caption in his book: “Sexual stimulation by combining ‘headlights’ with the sadist’s dream of tying up a woman.” 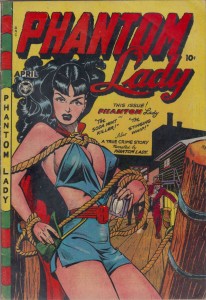 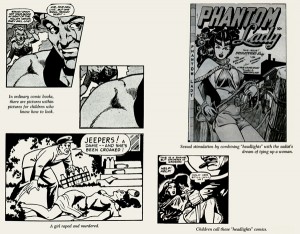 Page from Seduction of the Innocent, explaining how comics such as Baker’s Phantom Lady corrupt the minds of children.

Although comics fans would celebrate Baker’s artwork for its beauty and clear appreciation of the feminine form, Wertham’s book would all but drag it through the mud. Despite the fact, though, that the CCA and Comics Code would be implemented shortly after the conclusion of the Senate hearings, and publishers and artists were forced to comply with strict rules and regulations about how the female form could be drawn, there is no evidence that Baker ever had to redraw any of his works.

Baker is an icon of the Golden Age of comics, revered by the people who knew and worked with him and recognized by contemporary creators and fans for the stunning contributions that he made to the industry. He shaped women into classy, realistic beauties, equally full of character and staring in their own stories, as opposed to the accessories that they often were portrayed as in other comics of the time. “Baker might have known his life would be short. One hopes he had an inkling that his art would outlive him for decades,” notes Joseph Procopio, author of The Lost Art of Matt Baker.