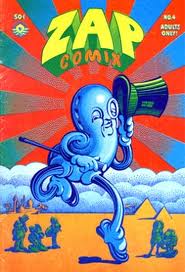 Calling all New Yorkers! Make time this month to visit the Society of Illustrators, where two incredible exhibits spotlighting the high points of subversive comics and illustration from the 1960s through the 1980s are on view.

First up is The Zap Show: A Cultural Revolution, a monumental retrospective of original art from the epoch-shattering comix anthology, curated by Monte Beauchamp and Eric Sack. Follow that with lunch in the Society’s Hall of Fame Dining Room, and take in Rick Meyerowitz in the National Lampoon.

Starting at 6:00 p.m. tonight, March 4, there’s an opening for both exhibits, featuring curators Beauchamp and Meyerowitz. The Meyerowitz exhibit comes down on April 23, followed by the Zap exhibit on May 7. The Society of Illustrators is located at 128 East 63rd Street at Lexington.

Taken together, Zap and National Lampoon represent a school of American comics satire that’s all but extinct today. Rude, political, scatological, and deeply subversive, these comics gave voice to the disaffected sensibility permeating America from the Vietnam War, through Watergate, and into the Reagan Era. The original art in these shows provides a ground level view of the rapidly changing mores, fashions, and values of America in that time. Zap‘s unflinching and uncensored point of view changed everything about what was possible in comics and viscerally reflected the turbulent transformations in the culture. Meyerowitz’s scathing attacks on the hypocrisy of political leadership transmuted headlines into furious, grotesque, and sickeningly funny images. As she walked me through the shows, Anelle Miller, SOI’s Executive Director, told me Meyerowitz is fond of saying, “This kind of work couldn’t happen anymore.” It can’t. And considering the headlines we read every morning, maybe it should.

But all of the above history and comment you can get anywhere. What you can only get by visiting the exhibits is an in-person glimpse at the incredible heights of artistic vision and technical proficiency that these artists wielded. All of S. Clay Wilson’s rancid chicken fat detail was executed with incredible precision and control, much of which is diminished in reproduction. Rick Griffin’s pages vibrate, as his bulbous figures emerge from deep pools of black ink. The fistic mayhem of Spain Rodriguez’s pages come to life through short, bold pen strokes. Meyerowitz’s exquisite command of color adds luminescent punch to the kinetic, exaggerated lines of his figures.

This pair of exhibits represents a rare opportunity to take in a group of artists who spoke truth to power as loudly as possible in a time when retailers were convicted for selling this stuff. Don’t miss your chance to see them!