A complaint from an advertiser has ended Rick Friday’s 21-year stint drawing cartoons for the Iowa-based newspaper Farm News. The prolific freelance cartoonist, who has drawn more than 1,000 cartoons for the paper, was let go after one company pulled their advertising over a Friday’s cartoon about corporate greed in farming.

Friday took to Facebook last Saturday to tell his story and defend his right to free speech. In a Facebook post, Friday announced that an undisclosed seed dealer that takes regular ads out in the newspaper cancelled their advertisement after reading Friday’s cartoon. In response to the advertiser’s action, Farm News let Friday go after an incredibly strong career doing work for the paper. Friday writes:

Again, I fall hard in the best interest of large corporations. I am no longer the Editorial Cartoonist for Farm News due to the attached cartoon which was published yesterday. Apparently a large company affiliated with one of the corporations mentioned in the cartoon was insulted and cancelled their advertisement with the paper, thus, resulting in the reprimand of my editor and cancellation of It’s Friday cartoons after 21 years of service and over 1090 published cartoons to over 24,000 households per week in 33 counties of Iowa.

I did my research and only submitted the facts in my cartoon.

That’s okay, hopefully my children and my grandchildren will see that this last cartoon published by Farm News out of Fort Dodge, Iowa, will shine light on how fragile our rights to free speech and free press really are in the country. 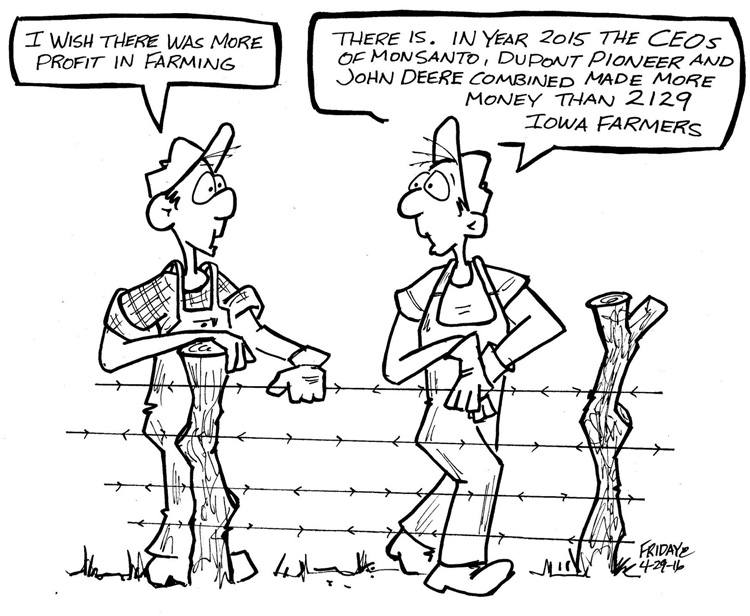 The latest cartoon in Friday’s “It’s Friday” series, shows a discussion between two farmers on the declining profits in farming. While one laments that he wishes “there was more profit in farming,” the other farmer notes that “there is. In year 2015 the CEOs of Monsanto, DuPont Pioneer and John Deere combined made more money than 2,129 Iowa farmers.”

According to The Des Moines Register, the CEOs earned about $52.9 million in 2015, whereas farm incomes are projected to be at their lowest level since 2002. Friday’s cartoon is based on these facts, but not everyone was happy to see that information distributed to thousands of Iowa households. “Well, believe it or not, Farm News’ 20-plus years relationship with you is over,” reads the email Farm News sent to Friday. “In the eyes of some, Big Ag cannot be criticized or poked fun at.”

Since being fired, Friday has been vocal about the state of free speech. Although the decision to print Friday’s cartoons is ultimately up to the newspaper’s editorial staff, their actions do raise concerns regarding free expression and the power large corporations can exert on speech, especially that of individuals and publications who don’t have the means to fight attempts to control content. “When it comes to altering someone’s opinion or someone’s voice for the purpose of wealth, I have a problem with that,” said Friday to KCCI. “It’s our constitutional right to free speech and our constitutional right to free press.”