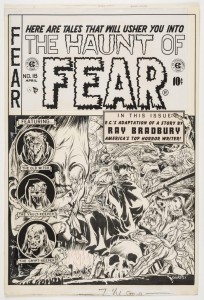 Haunt of Fear #18 Cover on display at JSMA

The Jordan Schnitzer Museum of Art at the University of Oregon in Eugene is celebrating the lasting legacy of EC Comics, both on and off the page, in a new exhibit called Aliens, Monsters, and Madmen: The Art of EC Comics.

Featuring one of the largest collections of original comic art, attendees can get a glimpse at one of the most contentious periods in American publication history. “Aliens, Monsters, and Madmen celebrates the achievements of the most artistically and politically adventurous American comic-book company of the twentieth century: Bill Gaines’s Entertaining Co.,” notes the exhibit description, which continues:

EC Comics offered a controversial mix of sensationalism and social provocation, mixing titillating storylines and imagery with more overtly politically progressive material… As a result, the company attracted the disapproval of parents, politicians, and moralists everywhere and was ultimately driven out of business as the result of a conservative “anti-comics” backlash in 1954.

Backlash and fear surrounding comics and their alleged connection to the alarming rise in child delinquency was propagated by infamous figures like Tennessee Senator Estes Kefauver and Brooklyn-based child psychologist Dr. Fredric Wertham for years. The crusade against comics — specifically the crime, horror, and terror comics being published by EC — would come to a head in 1954 after a Senate subcommittee hearing led to the comic book industry’s first self-regulating censorship agency, the Comics Code Authority (CCA).

The CCA established the Comics Code of 1954 using a strict set of content rules and regulations that meant the CCA would review every comic that was being considered for the newsstand. If you didn’t have the CCA’s “seal of approval,” no one would stock your books. In the wake of the Code, numerous publishers closed shop and comics professionals lost their jobs. With the advent of the Comics Code, industry mavericks like Bill Gaines could no longer publish the kinds of comics that were pushing the creative boundaries of a medium that was incorrectly assumed to be fodder for children.

Aliens, Monsters, and Madmen not only celebrates this rich history, but individuals who redefined comics storytelling like Bill Gaines, Harvey Kurtzman, Joe Orlando, and Wally Wood. “EC comics and its artwork now constitute highly valued collectibles,” says Ben Saunders, English professor and curator of the exhibit. “This show will be built around key examples of the original production art — unique and rarely seen objects of extraordinarily detailed craftsmanship by some of the most influential comics artists of the 20th century.”

Beyond EC, though, the exhibit is also working closely with student-run comics magazine Art Ducko to demonstrate just how much of an impact the works of EC have had on the comics industry even 60 years later. “Some of the great cartoonists of tomorrow may have already appeared in [Art Ducko’s] pages,” said Saunders to The Daily Emerald. “What better way to draw attention to the continued relevance of EC Comics, and to the creative strength of our own student cartoonists, than by launching the latest issue of the magazine at the opening of the exhibit?”

Alex Milshtein, editor in chief of Art Ducko, also sees the exhibit as a vehicle for increasing awareness of the unique history of America’s comics industry and bringing conversations about that history and the censorship it has endured to academic campuses. “I’m really excited, not just to see EC Comics, but to see the growth in comics studies and the comic community on the University of Oregon campus.”

Aliens, Monsters, and Madmen: The Art of EC Comics will be on display at the Jordan Schnitzer Museum of Art through July.