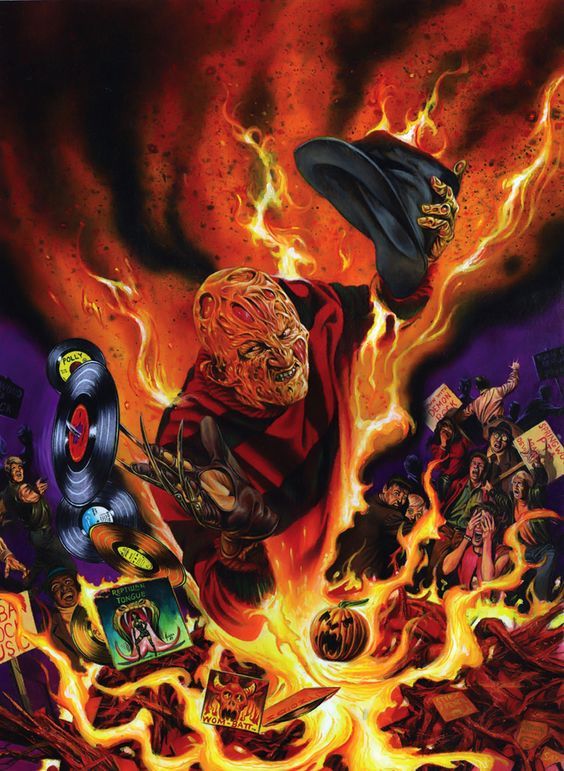 Anti-violence advocacy groups may have pressured the comic book adventures of everyone’s favorite worst nightmare Freddy Krueger out of publication in the early 1990s, but the unveiling of a relic from the recent past by Joe Jusko offers us a unique glance at a time when no form of media was safe from public fear and scrutiny.

Everyone was hot for horror in the last few decades of this past century. In the latter half of the 1900s, a genre that seemed to be censored and regulated to extinction by government authorities and anti-violence advocacy groups was making a comeback in a big way in the form of comics, movies, and video games, and everyone wanted to capitalize on the action. The comic book version of A Nightmare on Elm Street was Marvel’s ticket to the nightmare-laden show.

In 1989, Marvel released the black-and-white comic magazine Freddy Krueger’s A Nightmare on Elm Street, and it was an instant hit. Following the adventures of psychiatrist Dr. Juliann Quinn, the comic brought the horror of the big screen to the reader’s hands.

Adopting the black-and-white magazine format reminiscent of Warren Publishing’s Creepy and Eerie magazines of the 1970s further added a unique, nostalgic flavor to the series, and it proved to be the right choice to make what seemed to be an effortless success. “The comic book was presented in black and white, and feature[ed] quite a few striking images that are adored by hardcore fans who remember buying the comic when it first came out three decades ago,” writes B. Alan Orange of Movieweb.

Despite the success that the first two issues, though, just one year after its initial publication Marvel abruptly cancelled the series out of what appeared to be a fear of the potential backlash from groups attempting to stifle the influx of horror-genre media into the consumer market — media those groups were convinced were corrupting the minds of America’s youths. “According to my best information,” writer Steve Gerber recalls, “Marvel cancelled the book in anticipation of pressure from the various anti-violence advocate groups.”

Whether it be the Comics Code Authority with its newly revised Comics Code of 1989 which outlined what constituted “appropriate” levels of violence, or the newly emergent crusade against violent video games by government officials like Senator Joe Lieberman — a crusade that would lead to the formation of the industry-adopted regulatory system known as the ESRB — violent content was very much a hot topic of discussion in the media. “A few weeks prior to the release of the first Nightmare, there had been an article published in the New York Times decrying the level of violence in comic books,” says Gerber. “Apparently, that article, along with the picketing that took place outside theatres showing Nightmare 5 in Los Angeles and elsewhere, was enough to make Marvel turn tail and run for cover.”

Although Freddy Krueger’s A Nightmare on Elm Street wouldn’t make it past issue #2, artist Joe Jusko recently unveiled the unused cover of the cancelled third issue. The cover epitomizes so much of what anti-violence groups feared at the time: hellish flames from which the nightmare demon Freddy Krueger is emerging, album covers depicting satanic imagery, and even a mob of Springwood PTA members and everyday citizens cowering in fear at the scene unfolding. There are no children in the image, presumably because they have been consumed by Freddy and his “demon rock.”

This may have been the cover to a comic book, but the artwork perfectly captures a moment in American publication history when the general public truly thought that the consumption of things like movies, comics, and video games would lead to violent behavior in American youths — a mindset that many media industries are still fighting to this day. Although Marvel’s comic was appropriately labeled mature and though no explicit attacks were made against the comic itself, as Gerber reminds up, “The cancellation of Nightmare is a textbook example of the ‘chilling effect’ you hear so much about these days in discussions of free speech. The book was killed not because it WAS criticized, but because the publishers FEARED it would be criticized.”