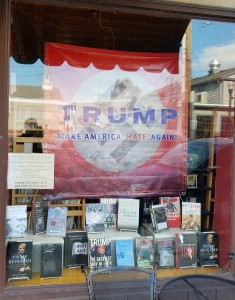 A bookstore in Saugerties, New York, was threatened with misdemeanor zoning violation charges over an anti-Trump window display.

Inquiring Minds Bookstore owner Brian Donoghue assembled the display to voice his concerns over statements made by Trump during his campaign. “I really felt I was in prewar Nazi Germany. I saw neo-Nazis there. I saw absolute hate, and it scared me for my family. It scared me for my children’s future,” Donoghue said.

The display featured books about Hitler and Trump and a banner bearing a swastika and the phrase “Trump: Make America Hate Again.” Store staff supported the display according to Donoghue. “They all felt like they took part in something that made a difference,” he told the American Booksellers Association.

The city sent two zoning violation citations to the store, demanding the removal of the display by November 1 or Donoghue would face misdemeanor charges. The store was picketed by Trump supporters on October 18 and the Anti-Defamation League, which works to combat anti-Semitism, sent a press release demanding the removal of the banner, saying that “Using the symbol of Nazism is highly inappropriate and repugnant.”

Lawyers for the Media Coalition, of which CBLDF is a member, informed city officials that their order to remove the display was in violation of Donoghue’s First Amendment right to free expression. In response, city officials refused to admit any wrongdoing and agreed to remove the notices if Donoghue took down the display after the election — something Donoghue intended to do regardless.

Despite the controversy, Donoghue says that the store is doing well after his exercise in free expression. “After reading about it in the paper, people came from all over the region to make a point of visiting the store,” Donoghue said, adding “In fact, people were calling and e-mailing orders from all across the country.”