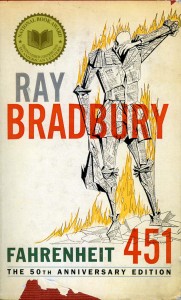 Few would disagree that in the current context of rampant misinformation, students in public schools must be trained to seek out reliable facts and assess sources. Nevertheless, every year more and more school librarians–the professionals who teach those exact skills–are cut from their positions across the country. In a recent column for the Chicago Tribune, Ray Bradbury’s official biographer Sam Weller warned that “in cutting trained librarians in our schools, we are stepping ever closer to Bradbury’s fictional dystopia [in Fahrenheit 451].”

Weller, also an associate professor of creative writing at Columbia College Chicago, ran through a few sad examples of school library cuts from around the country–including in Chicago Public Schools, where the number of professional librarians has fallen from 454 in 2012 to 160 this school year. Even at its peak, the Chicago librarian corps could not hope to provide full service to the more than 600 schools in the district. As Weller points out, the cuts disproportionately affect lower-income students since wealthier schools can draw on PTA or booster funds to keep a librarian in the budget.

Weller warns of the dire consequences that will result from public school students missing out on information literacy education and access to a robust, thoughtfully curated collection of resources:

School librarians are the ushers who light the path for our children. They guide students toward knowledge, understanding and empathy. They foster a sense of curiosity and teach young people the tools necessary to research effectively and think critically. Make no mistake — librarians are teachers.

As Bradbury famously stated: ‘You don’t have to burn books to destroy a culture. Just get people to stop reading them.’

As we warned in 2014, the librarian cuts also remove one of the first and strongest bulwarks against censorship in schools. The previous year, when Chicago Public Schools administrators attempted to remove Marjane Satrapi’s Persepolis from classrooms (and libraries too, initially) due to violent imagery, it was librarians who raised the alarm. The precipitous drop in CPS librarian numbers was probably not a direct result of the Persepolis affair, but administrators with little regard for intellectual freedom likely are not disappointed to get them out of the way. As this sad situation is replicated in districts across the country, Weller asks: “Who needs to douse kerosene on a stack of books and light a match when it’s so much easier to devalue our school libraries and lay off our librarians?”