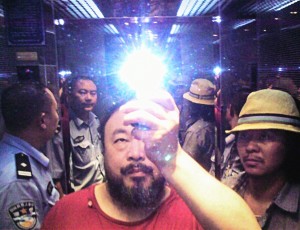 Chinese artist Ai Weiwei has long been a thorn in the side of authorities, defiantly finding ways to critique government corruption and suppression despite constant surveillance, threats, detention, and a four-year revocation of his passport which prevented him from traveling abroad. In a recent op-ed for the New York Times, he laid out what he has observed about the overarching structure and function of censorship from the inside.

In a system where the vast majority of information is controlled by the government, Ai says, citizens’ senses are permanently deadened:

Censoring speech removes the freedom to choose what to take in and to express to others, and this inevitably leads to depression in people. Wherever fear dominates, true happiness vanishes and individual willpower runs dry. Judgments become distorted and rationality itself begins to slip away. Group behavior can become wild, abnormal and violent.

In fact, repressive regimes rely on the majority of the populace choosing the path of least resistance: self-censorship. While he acknowledges that the behavior stems from a corresponding self-preservation instinct, he doesn’t harbor much sympathy for those who quietly acquiesce:

People who willingly censor themselves are vulnerable to moral challenges of many kinds. They have never been victims and never will be, despite their occasional show of tear wiping. Each time they display their servility, they bring warmth to the hearts of the authoritarians and harm to people who protest. Their craven stance, as it becomes widespread, also becomes the deeper reason for the moral collapse of our society.

Moreover, while the average citizen simply needs to remain silent in order to go along with the system, cultural gatekeepers who cooperate are even more culpable because they must take an active role in ensuring speech does not stray from the government line. Artists and other creators, Ai believes, therefore have a duty to resist this system even if it seems futile:

Only when China offers fair and just platforms for expression of public opinion will we have ways of meeting minds by using our words. I support the establishment of such platforms. This should be the first principle in making social justice possible. But in a place where everything is fake, right down to the last hair, anyone who stands up to quibble about truth seems naïve, even childlike. In the end, I find the ‘naïve’ route the only one left open to me.

In modern China, Ai observes, “rational resistance can be based only on the small actions of individual people”–but every small act of resistance demonstrates to others that the status quo is not unbreakable. “Ideological slaves, too, can revolt,” he concludes. “In the end, they always do.”