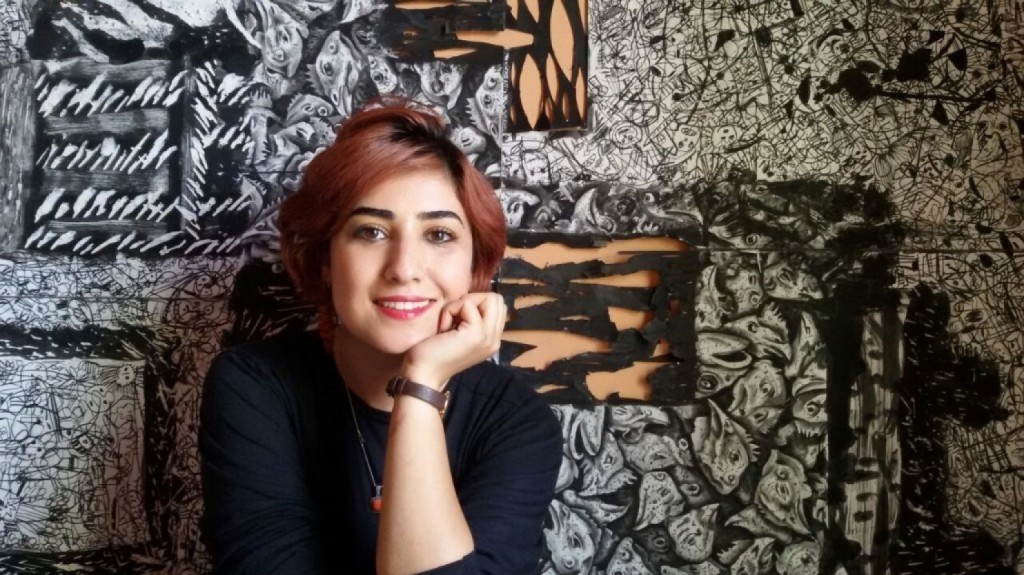 Just over a year ago, Iranian artist and activist Atena Farghadani was released from prison after 18 months. Her so-called crime: drawing Iranian MPs as apes and bovines while they debated a bill toban voluntary sterilization procedures such as vasectomies and tubal ligations. In a recent episode of Amnesty International’s podcast “In Their Own Words,” Farghadani gave a full account of her imprisonment and her determination to keep making political art, even as she deals with overwhelming anxiety that she could be arrested again.

In the forty-minute podcast, Farghadani’s firsthand story is read in English by Nazanin Boniadi, an Iranian-British actress and human rights advocate for Amnesty International who also worked to bring international attention to the case while the artist was in prison. Amnesty has also summarized the podcast in a blog post which includes brief audio clips.

When she was initially arrested at 27 years of age in August 2014, Farghadani was immediately put into an insect-infested solitary confinement cell in Tehran’s Evin Prison, where most political prisoners in Iran are housed. In the narrow high-walled space, she recalls that “it absolutely felt like I was in a grave.” After six weeks of interrogation, she was released on bail but promptly uploaded avideo to YouTube detailing abuses she suffered in prison including beatings and strip searches. In reprisal for speaking out, she was rearrested in January 2015.

Instead of being sent back to Evin, Farghadani was then thrown in Gharchak Prison with violent criminals. She began a hunger strike in protest, going into cardiac arrest after 22 days. After a brief hospital stay during which she was shackled to the bed, she was finally moved back to Evin. The reprisals were not finished, however, as authorities charged her and her lawyer Mohamed Moghimi with having an “illicit sexual relationship” because they shook hands when he visited to discuss her case.

Moghimi also was briefly imprisoned, and both he and Farghadani were successfully defended by yet another lawyer–but not before authorities forced her to undergo an involuntary pregnancy test and vaginal exam. Farghadani notes that this so-called “virginity test” is “a tactic they use sometimes against political prisoners – particularly young, unmarried women.” Unable to convince her family to publicly speak about the “invasive and degrading” assault, she instead managed to get a note out to an Iranian pro-democracy organization which communicated it to international NGOs.

In April 2016 Farghadani’s sentence was unexpectedly shortened–largely due to international publicity and pressure, she believes–and she was released on May 3. She still has two years left of a three-year suspended sentence, however, meaning that she could be sent back to prison without trial at any time. That prospect weighs heavily on her, but she refuses to make things easier on herself by stopping her activism:

I don’t intend to stop protesting or making political art….Art is like a part of me, and I can’t give up on political or protest art. I feel old and I feel depressed, partly due to the nightmares I’m suffering from. Most of them are about getting stuck in a bathroom or toilet. They always occur in the same toilet: I’m trapped in a grave that’s actually a toilet, or I get stuck in a bathroom with no door….I didn’t have these dreams when I was in prison. I had better sleep in prison.

Farghadani is willing to bear the risk to herself if her vocal advocacy can help to improve conditions for current and future political prisoners in Iran, she says:

Much of what I’ve said today could get me in trouble, I think. But I’ve decided to speak out because over time I’ve learned that when the media reports on an issue, others in the same situation won’t be treated as badly.

As always, CBLDF is amazed and humbled by Farghadani’s selfless courage, and we wish the best for her. Listen to the entire podcast episode here, or subscribe to Amnesty’s “In Their Own Words” through iTunes or another podcasting service. You can also view some of her recent art on her Facebook page.