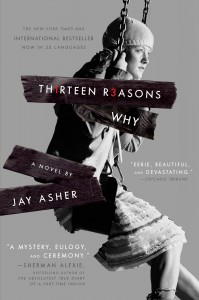 Ten years after its initial publication, Jay Asher’s young adult novel Thirteen Reasons Why is encountering a sudden surge in challenges, bans, and restrictions in schools around the country due to panicked adult backlash against the Netflix series based on it, which met with instant success among teens after its March 31 release. In the past few weeks, the book has been banned from an elementary school in Florida and an entire school district in Colorado, despite the fact that no parents had formally challenged it in either case.

The Netflix series in particular has been criticized by some for allegedly glamorizing teen suicide as it depicts the events leading up to the death of Hannah Baker, a high school student who kills herself after recording 13 cassette taped messages for people she feels contributed to her misery. School administrators in numerous districts have cautioned parents about the series, urging them to either watch and discuss it with their teens, or shield them from it altogether if they may already be at risk of suicide.

As is usually the case with page-to-screen adaptations, of course, Asher’s novel tends to be more nuanced and introspective than the Netflix series. The book was already widely popular among teens, but also critically praised and listed in a host of “Best of” collections, including the American Library Association’s Best Books for Young Adults and Quick Picks for Reluctant Young Adult Readers. Another frequently challenged author, Sherman Alexie, provided a quote for the book’s cover that encapsulates how the subject matter is both disturbing and compelling:

Thirteen Reasons Why is a mystery, eulogy, and ceremony. Twenty or thirty times, I snapped the book shut when a sentence, an image, or a line of dialogue was too beautiful and painful. But I, afraid and curious, would always return to this amazing book. I know, in years to come, I will often return to this book.

There is certainly no doubt that teen suicide is a serious topic that understandably terrifies parents and school officials. But much like researchers have never found a definitive link between violent video games and violent real-life behavior, studies have not found that fictional depictions of suicide actually increase the risk of self-harm among consumers of the media. In fact, some suicide prevention advocates feel that Thirteen Reasons Why is more likely to spur at-risk teens to open up and seek help. Carol Skiljan of the San Diego chapter of the Yellow Ribbon Suicide Prevention Program expressed that hope to the San Diego Union Tribune:

From my point of view, to get people talking about it is a good thing. As long as we equip them with the information that suicide is preventable and help people identify resources. We encourage parents to use this as a teachable moment. Ignoring suicide never makes it go away.

In Colorado’s Mesa County Valley School District 51 recently, one administrator tried to shut down that potential teachable moment by removing all copies of the book from school libraries, even though it had not been challenged by any parents. In an email to librarians on April 28, executive director of academic achievement and growth Leigh Grasso wrote that “due to recent events and media attention on the Netflix movie 13 Reasons Why, I am going to have this book temporarily removed from any kind of check out.” Tragically, the recent events to which she referred include the suicides of at least seven District 51 students in the 2016-2017 school year.

Multiple librarians quickly pushed back against the directive, however, pointing out that the district has a challenge policy that must be followed before any book can be removed–and in this case, they hadn’t even received a challenge in the first place. One middle school librarian wrote that “once we start pulling and censoring books for all students as a reactive measure there is no line to which we follow,” while another protested that far from encouraging suicide, the book “was written as a suicide prevention awareness novel.” Reportedly by the end of the same day, Grasso agreed not to require that the book be pulled from shelves.

Around the same time across the country in Florida’s Orange County, administrators at Stone Lakes Elementary School pre-emptively banned students from bringing their own copies of the book to school. The school library held no copies of the novel, which is geared towards older readers, but guidance counselor Alison Morris said in an email that some students have read it independently and talked about it with their classmates. The email asked parents who are allowing their children to read the book to “please have them keep their copy at home as it is not appropriate for an Elementary School campus.” The book remains unrestricted at other schools in Orange County, however.