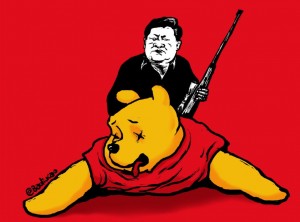 Winnie the Pooh has become the latest casualty in the ongoing war between online censors and the internet denizens of China.

Users of Chinese social media sites Weibo and Wechat have found themselves censored when referencing Winnie the Pooh, due to a meme comparing the A.A. Milne character via Disney to Chinese president Xi Jinping.

On Weibo, users attempting to post comments containing Pooh’s Chinese name, “Little Bear Winnie,” are met with an error message that blocks the post and tells them “this content is illegal.” Users of WeChat have likewise reported censorship; although posters are able to use Winnie’s name, WeChat’s official gallery has removed all stickers related to the rotund bear.

This isn’t the first time that Chinese censors have targeted Winnie the Pooh. In 2013 an image meme comparing a photo of Xi and President Obama to a picture of Winnie the Pooh and Tigger went viral on Weibo, which led to a similar ban. Similar Pooh memes returned in 2014 and 2015, and with an upcoming party congress this year, censors are especially touchy.

Pooh memes are only the most recent weapon in the irreverent arsenal of Chinese internet users who use image memes to get around censors who have a long list of banned words and phrases. Simultaneously amusing jokes and legitimate forms of protest, these image memes reference censored events and ideas, such as the Tienanmen Square protests and June 4th Massacre.

Unable to refer to these events with words, Chinese internet users resort to edited images, which are harder to police with automatic filters. In these image memes, Tiananmen Square’s famous line of tanks becomes a procession of rubber duckies, bulldozers, or tires, which bear down on cows, praying mantises, or Lego minifigs. The important date of June 4th, 1989 is alluded to with pictures of cards and calculators as well, in order to get around censored dates.

This cavalcade of innuendo, humor, and sly references forces censors to block an ever expanding list of phrases which becomes more absurd by the day—which just serves to highlight the absurdity of the censorship itself.

Contributing Editor Charles Howitt is a writer and artist who is neither a writer nor artist. Discuss.