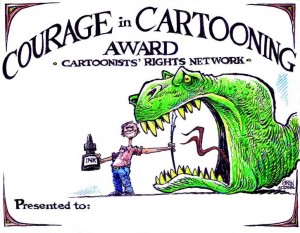 Cartoonists’ Rights International has opened nominations for their Courage in Editorial Cartooning Award. You can nominate “a cartoonist or group of cartoonists who have displayed courage in the face of threats to their life or liberty.” The nomination deadline is September 15.

The award is given to cartoonists who have faced physical harm, imprisonment, and other significant obstacles to their work as cartoonists. Last year, Eaten Fish, an Iranian refugee languishing in an Australian detention center, received the award. Atena Farghadani was given the award in absentia in 2015 because she was jailed in an Iranian prison for a cartoon mocking the government’s attempts to curtail birth control.

Note that there is no competition, exhibition or public event associated with this award and we are not seeking entries on the themes of freedom, bravery etc. Do not send us your cartoons.

We require only the name of a cartoonist or cartoonists who have experienced threats in the past year and either a brief summary of the situation or a link to a website that describes it.

Nominations should be sent to our Executive Director, Dr Robert Russell — director@cartoonistsrights.org — with the subject line “2017 AWARD NOMINEES”. Please submit your ideas no later than 17:00 EST, September 15th 2017.

With cartoonists like Zunar, Musa Kart, and many more around the world facing long prison sentences and persecution for their work, the field for the award is uncomfortably large.

The winner will be announced in November, at the conclusion of the Association of American Editorial Cartoonists convention at Hofstra University, New York.